“In the water world, the pre-1914 rights were considered to be gold,” exclaimed one water attorney, but as AP reports, it appears that ‘gold’ is being tested as California water regulators flexed their muscles by ordering a group of farmers to stop pumping from a branch of the San Joaquin River amid an escalating battle over how much power the state has to protect waterways that are drying up in the drought. As usual, governments do what they want with one almond farmer raging “I’ve made investments as a farmer based on the rule of law…Now, somebody’s changing the law that we depend on.” This is not abiout toi get any better as NBCNews reports, this drought is of historic proportions – the worst in over 100 years.

The current drought has averaged a reading of -3.67 over the last three years, nearly twice as bad as the second-driest stretch since 1900, which occurred in 1959. 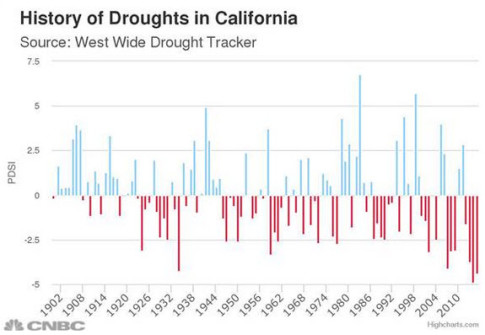 Other studies using PDSI data drawn from tree-ring observations reaching even further back in time reveal similar findings. One such study from University of Minnesota and Woods Hole Oceanographic Institute researchers showed the current drought is California’s worst in at least 1,200 years.

And as AP reports, regulatords are changing the laws to address the problems…

The State Water Resources Control Board issued the cease and desist order Thursday against an irrigation district in California’s agriculture-rich Central Valley that it said had failed to obey a previous warning to stop pumping. Hefty fines could follow.

The action against the West Side Irrigation District in Tracy could be the first of many as farmers, cities and corporations dig in to protect water rights that were secured long before people began flooding the West and have remained all but immune from mandatory curtailments.

“I’ve made investments as a farmer based on the rule of law,” said David Phippen, an almond grower in the South San Joaquin Irrigation District. “Now, somebody’s changing the law that we depend on.”

Phippen said his grandfather paid a premium price in the 1930s for hundreds of acres because it came with nearly ironclad senior water rights.

Phippen said he takes those rights to the bank when he needs loans to replant almond orchards or install new irrigation lines. He fears that state officials are tampering with that time-tested system.

Several irrigation districts have filed unresolved legal challenges to stop the curtailments demanded by the state.

Among them is the West Side Irrigation District, which claimed a victory in a ruling last week by a Sacramento judge who said the state’s initial order to stop pumping amounted to an unconstitutional violation of due process rights by not allowing hearings on the cuts.

Superior Court Judge Shelleyanne Chang also indicated, however, that the water board can advise water rights holders to curtail use and fine them if the agency determines use exceeded the limit.

West Side is a small district with junior water rights, but the ruling also has implications for larger districts with senior rights.

West Side’s attorney Steven Herum said the order issued Thursday was prompted after the judge sided with his client.

“It is clear that the cease-and-desist order is retaliatory,” Herum said. “It’s intended to punish the district.”

Buzz Thompson, a water rights expert at Stanford Law School, expects California to prevail in the fight to pursue its unprecedented water cuts because courts have consistently expanded its authority.

“It’s only when you get into a really serious drought that you finally face the question,” he said.

California is an anomaly among Western states in the way it treats water rights. Thompson said other states use widespread meters and remote sensors to measure consumption or don’t provide special status to those with property next to natural waterways.

“In any other state, this wouldn’t be a question,” he said.

California rights holders are going to have to abide by more strict measurement requirements starting next year after fighting several attempts to overhaul the rules for decades, said Andy Sawyer, a longtime attorney at the water board.

The Water Wars are just beginning and, it appears, with big oil still exempt, the small businessman and average joe face the costs…