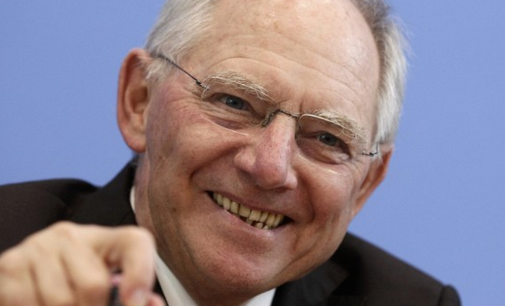 Over the weekend, the entire world looked on in horror as Alexis Tsipras – who just days earlier secured a crucial referendum victory which by all accounts empowered him to ride into Brussels a conquering hero – was eviscerated by German FinMin Wolfgang Schaeuble and several like-minded EU finance ministers who smelled blood last Thursday after Greece submitted a proposal that betrayed the Greek PM’s lack of conviction.

As outlined exhaustively here over the past 24 hours, the new “deal” for Greece has implications far beyond the Aegean and may well mark the beginning of the end for the EMU experiment, for although the Greek drama highlights the need for a fiscal union to compliment the common currency, the “bargaining” stance adopted by Germany makes it far less likely that financially weaker states will be willing to turn over their fiscal affairs to Brussels.

But leaving the bigger picture implications aside for now, the two most important short-term considerations for Greece are: 1) establishing political stability, and 2) stabilizing the banks.

Neither of these will be easy.

In fact, both could prove to be rather monumental tasks. With Tsipras facing a party revolt and the Greek banking sector facing outright insolvency, Deutsche Bank has more on politics and bank “normalization.”

On the political side, statements from Greek PM Tsipras following the conclusion of the summit indicate a desire to take ownership of the “difficult” agreement, despite the large concessions made. We would consider this as significant, as the PM still commands a meaningful degree of influence in Greek public opinion as well as within the SYRIZA party itself. Following Saturday’s authorization vote in the Greek parliament, at least 32 government MPs have indicated they would be unwilling to support an agreement, effectively leading to a loss in the government’s parliamentary majority. The support of Independent Greek junior coalition member also remains to be seen following negative statements on a potential agreement from party leader Kammenos overnight, effectively leading to a potential loss of more than 40 MPs from the government coalition.

As such, we would consider a minority or national unity government as the most likely outcome following the Greek PM’s return to Athens later today. A minority government would involve a major cabinet reshuffle by the Prime Minister with the departure of dissenting cabinet ministers (most notably energy minister Lafazanis) and the replacement by more politically-neutral members. Opposition support would remain at arm’s length, to be provided by New Democracy, River and PASOK controlling more than 100 MPs. Combined with support from moderate SYRIZA MPs, this would generate a parliamentary majority of at least two-thirds. The alternative outcome would be a government of national unity with more active involvement by pro-European parliaments in the cabinet re-shuffle as well.

Whether Greek PM Tsipras would remain in his position under such a government remains to be seen, but party leader statements so far suggest that this may be acceptable. Either way, PM Tsipras will have to take decisions on how the SYRIZA party membership and parliamentary group is likely to change in coming days: press reports that he is likely to ask for dissenting MP resignations, to be replaced by more moderate MPs, inclusive of outspoken Speaker of the House Konstantopoulou who also expressed disagreement over the weekend. Whether dissenting SYRIZA MPs resign or form a new anti-euro parliamentary grouping remains to be seen. Either way, it is likely that the new government’s mandate is implicitly or explicitly set to run until the signing of a new ESM agreement by September, to be followed by a new election. Greek politics are now likely to shift to more well-defined political narratives, ultimately distinguished by party positions on euro membership rather than austerity.

In terms of the Greek banking sector, immediate decisions will need to be taken given the exhaustion of the ECB ELA buffer. An immediate increase in the ELA cap would allow continued rationing of cash from ATMs in coming days. It is possible the ECB waits for such a decision on Wednesday, when the ESM negotiations formally re-open and there is a “credible perspective” for the conclusion of the review. (ZH: it does indeed appear the ECB is waiting until Wednesday at least). More broadly, the return to a more normally functioning banking system in Greece with fewer restraints on liquidity will likely depend on the timeframe of a new bank recapitalization program. The Euro leaders statement highlights that this will require a comprehensive recapitalization exercise following the transposition of the Bank Recovery and Resolution Directive in Greek legislation. At face value, this suggests that the possibility of depositor bail-in cannot be ruled out given the directive’s provisions. In practice, it is unlikely that there are a significant number of deposits above the directive’s 100k legally protected limit implying that this may be avoided. Still, bank recapitalization is unlikely to take place until after the summer. In the meantime, the ECB will require bank solvency assurances to maintain financing of the Greek banking system and continue to increase ELA, particularly given Greek bank’s declining collateral availability, likely at around 5bn EUR under the current ELA haircut schedule. ECB financing in coming months will likely need a front-loaded disbursement of ESM guarantee funds in an escrow account or an alternative “bridge guarantee” financing method. Either way, it is unlikely that capital controls are lifted soon.

As you can see, a government reshuffle (something we’ve predicted for months) is imminent although it is as yet entirely unclear what the political landscape will look like in six months and indeed it’s not at all clear whether Tsipras will survive the melee.

As for the banks, well, they’re essentially wandering aimlessly through a minefield. For those interested in a detailed account of the challenges that lie ahead for the Greek banking sector, see “Greek Banks Not Out Of The Woods, May Impose Tougher Capital Controls.” The short version is simply this: Lacking sufficient collateral to keep the ELA game up for much longer, Greece’s banks will need to be recapitalized in short order barring a dramatic decrease in ECB haircuts. Even in the most optimistic scenario, capital controls are likely here to stay for the foreseeable future.