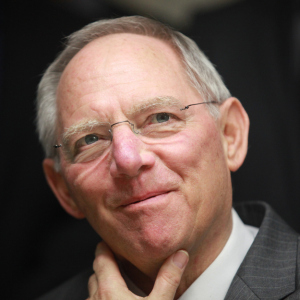 While the Greek “compromise” deal may have averted an outright economic collapse in Greece in the short-term (although one would be hard pressed to describe the current situation on the ground as anything other than a depression) and may for the time being allow EU officials to cling to the notion that the euro is “indissoluble,” the fraught negotiations that took place over the weekend in Brussels laid bare for all to see the unbridgeable gap between EMU nations.

If there were any doubts about who runs the show, German FinMin Wolfgang Schaeuble erased them on Sunday by pushing through a term sheet that effectively strips Greece of its sovereignty on the way to seizing state assets and relegates its people to perpetual debt servitude. If this is the meaning of a currency “union”, it’s not entirely clear why any state would want to be a part of it.

With the birthplace of Western civilization now completely beholden to the politicians who control the purse strings, BofAML and Deutsche Bank are out with some brief, but poignant commentary on what the future holds for the currency bloc.

Although the idea seems to have been dropped, the draft of conclusions the Eurogroup circulated to the Heads of State contained a temporary exit from the Euro as an alternative to a deal. Exit from the currency block is now officially something that can be used as a threat to those that don’t behave the German way. More importantly, it can be temporary which, in principle, would make it more feasible relative to a permanent one. This is a bad idea in our view. It would mean the return of convertibility risk to spreads in the medium run. If the idea of an exit was bad, a temporary one is even worse. The ECB would be there as first line against contagion in the short run. But we had argued in the medium run a move towards more integration would be needed. If we have learned something today is that there is little appetite for more integration.

After a truly unprecedented 17-hour Euro leaders summit, a deal has been finally struck on Greece. The agreement sets the framework around which Greece can avoid an exit from the euro. The Greek government is required to deliver against an incredibly detailed set of conditionalities to receive aid, a signal of the significant lack of trust between the authorities and its creditors.

On the negative side execution risks remain high and the new agreement will further increase pressure on the economy as well as possibly leading to the creation of political parties more explicitly against euro membership in Greece in the future. The last six months’ crisis has exposed weaknesses in the Eurozone’s governance framework that will likely reverberate for months and years into the future.

1 thought on “EU Exit Will Now Be “Threat To Those Who Don’t Behave The German Way,” BofA Says”