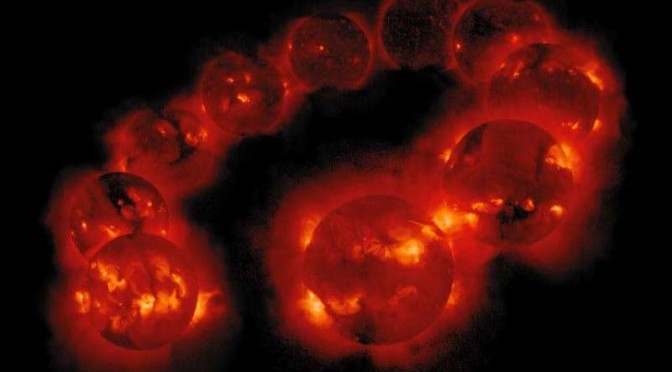 A new model of the Sun’s 11-year heartbeat suggests that solar activity will fall by 60 per cent during the 2030s, dropping to conditions last seen during the Maunder minimum.

Beginning in about 1645, the Maunder minimum corresponded with the severest portion of the last “Little Ice Age.”

Results of the new study were to be presented yesterday by Prof Valentina Zharkova at the National Astronomy Meeting in Llandudno.

Many solar physicists think the solar cycle is driven by a dynamo caused by convecting fluid deep within the Sun. However, when Zharkova and her colleagues added a second dynamo close to the surface, they found that it completed the picture with unprecedented accuracy.

“Our predictions showed an accuracy of 97%,” said Zharkova.

The model predicts that the waves from the two dynamos will become increasingly offset during Cycle 25, which peaks in 2022. During Cycle 26, from about 2030 to 2040, the two waves will become exactly out of synch, leading to a significant reduction in solar activity.

“In cycle 26, the two waves exactly mirror each other – peaking at the same time but in opposite hemispheres of the Sun. Their interaction will be disruptive, or they will nearly cancel each other. We predict that this will lead to the properties of a ‘Maunder minimum’,” said Zharkova. “Effectively, when the waves are approximately in phase, they can show strong interaction, or resonance, and we have strong solar activity. When they are out of phase, we have solar minimums. When there is full phase separation, we have the conditions last seen during the Maunder minimum, 370 years ago.”

In other words, we should expect continued deterioration in global climatic conditions between now and  2022, at the peak of Cycle 25.

That’s only seven years away!

Then it will get worse.

We will be praying for global warming.

Thanks to Bill Sellers for this link

The above montage shows images of solar activity between August 1991 and September 2001 taken by the Yohkoh Soft X-ray Telecope, showing variation in solar activity during a sunspot cycle. Credit: Yohkoh/ISAS/Lockheed-Martin/NAOJ/U. Tokyo/NASA