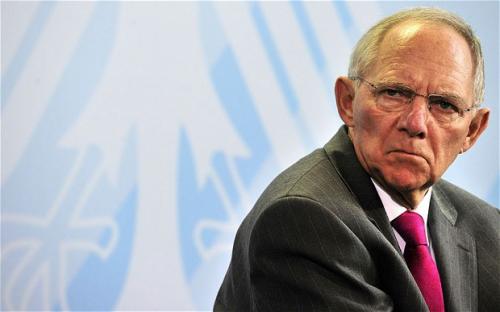 “Since the start, the European Commission had the objective, that of the integrity of the euro. It was to keep a reformed Greece in the euro zone.”
“I note that the Greek government has made significant gestures.”
“We (the creditors) have said the Greek reform programme could constitute a basis for a new programme.”
“Our general sentiment is that there need to be reforms, solid reforms, reforms appropriate to the Greek authorities and reforms that are implemented as soon as possible.”

And here are the punchlines:

The German Finance Ministry has communicated its negative assessment of the Greek proposals to other Euro countries on Saturday. “These proposals are missing centrally important areas of reform to modernize the country and to advance on the long term economic growth and sustainable development,” it said in the one-sided position paper, which was present at the Frankfurter Allgemeine Sonntagszeitung (FAS). Therefore they could “not be the basis for a completely new, three-year ESM program”.

Instead, the Treasury took two paths in the eye that remained.

One way: Greece improved its proposals quickly and comprehensively, with the full support of Parliament. The Ministry suggested among other things that Greece shall transfer assets amounting to 50 billion euros to a trust fund, which it sells and thus removes debt.

Way two: With Athens is negotiating a “time out”. It leaves the euro zone for at least five years and restructures its debt. However, it remains the EU Member and receives further “growth-enhancing, humanitarian and technical assistance,” says the “FAS”.

“These proposals miss out important central reform areas to modernise the country and to bring economic growth and sustainable development over the long term,” the FAS quoted the ministry as writing in a position paper.

Instead, the ministry set out two alternative courses for Greece. Under the first, Athens would improve its proposals quickly and transfer assets worth 50 billion euros ($56 billion) to a fund in order to pay down its debt.

Under the second scenario, Greece would take a “timeout” from the euro zone of at least five years and restructure its debt, while remaining a member of the European Union.

In other words, Germany just said kick Greece out, conditionally, for 5 years (it is not quite clear what Greece would use for currency in the meantime), quarantine it, and treat it as a third-world country until 2020. Somehow we doubt global stocks expected this outcome when they soared on Friday.

As expected, Greece quickly denied this:

And at least one member of the anti-German/austerity axis chimed in as well:

But with Germany making its semi-officially position known, and with the reality that Greece would essentially have to abdicate sovereignty to assure Europe that it will comply with any additional bailout conditions and further spending cut demands (of which there will be plenty), just what is the other “serious solution” alternative here?