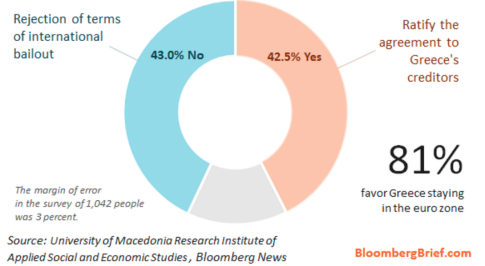 With just hours to go until Greeks head to the ballot box to decide the country’s fate in the eurozone, the latest polls show a nation divided with only a half percentage point separating the “no” votes from the “yes” votes.

Underscoring the ‘dead heat’ preliminary poll results, the yes’s and the no’s staged dueling protests in the streets of Athens on Friday night. All told, as many as 50,000 people participated in the competing demonstrations with PM Alexis Tsipras making an appearance at the “No” rally.

As a reminder, this is the schedule for the referendum:

WHEN ARE RESULTS DUE

And this is where things stand:

As noted earlier today, Athenians are restless and we can’t help but wonder what the scene will be in the streets of Athens on Sunday evening once the results are tallied and one of these two dueling groups is forced to acquiesce to the other’s vision of Greece’s future.