“Looking at these figures merely confirms the economic slump we’re all in.
Nobody wants anything because they’re correctly prioritising.
Low demand = reduced prices, low commodity prices, suppressed wages and on and on and on.

The timing is perfect for an economic collapse, but the war hasn’t been declared yet to hide the reality in the matrix of bullshit.”

So how much exactly are the largest US corporations, those in the S&P 500, worried about Greece? The horrific damage that a Grexit might do to the EU economy, global financial markets, the euro, and even, it seems, the survival of the species?

You’d think they’d be quaking in their boots, given the mutual extortion racket carried out via the media through leaks, rumors, and contradictory announcements. You’d think they’d be fretting over every final-final-final-last-chance-deadline for Greece to accept the fine print that comes with more money that will eventually be extracted from strung-out taxpayers in other countries. You’d think US corporations, at a minimum, would start blaming Greece and its side effects for things gone wrong. So…

“One way to gauge the level of concern about the situation in Greece is to see how many S&P 500 companies mentioned Greece relative to other countries during recent earnings conference calls,” FactSet said in its latest Earnings Insight. And so it combed through the 21 earnings conference calls held since June 1 by S&P 500 companies – a decent sample – and searched for 50 foreign countries, including Greece.

Turns out, “Greece has not been mentioned in any of the earnings calls.” Instead, there were some other winners, based on the percentage of companies that mentioned these countries: 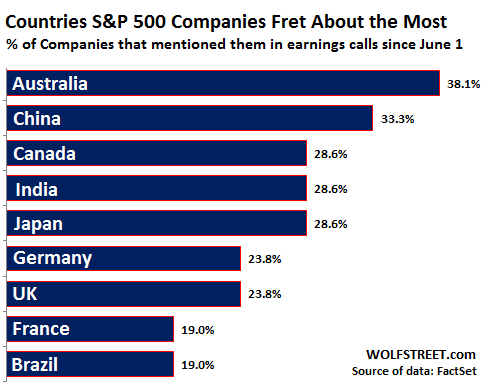 No. 1: Australia has been getting hammered by a resource bust that includes oil, LNG, and iron ore. There is a tremendous housing bubble in Sydney, Melbourne, and some other cities, accompanied by a mortgage debt boom. The banks that funded it all are heavily exposed. The loans that the Big Four Australian banks – ANZ, Commonwealth, National Australia Bank, and Westpac – have on their books exceed 210% of Australia’s GDP. If a portion of these loans curdle, either due to the ongoing resource bust, or due to a potential housing bust, or both, these banks would not only be too big to fail, but too big to save for Australia [How Australia’s Big 4 Banks Can Sink the Entire Economy].

No. 2: China has entered a hard landing [“China Momentum Indicator” at Hard-Landing Level]. Its stock markets, after skyrocketing for a year despite economic thunderheads all around, have been crashing with relentless brutality. The Shanghai Composite Index plunged 19% over the last ten trading days, the Shenzhen Composite 20%. And the ChiNext Index, where startups perform their miracles, has plummeted 27% from its high on June 3.

A lot of “wealth” that the stock-market insanity had created over the past year got destroyed unceremoniously. Chinese stock markets – like most stock markets these days – are not connected to the real economy or businesses. They’re a separate machine where people go to gamble and have fun. But the “wealth effect” does impact the economy, and so does the effect when it all unwinds. Short-seller Muddy Waters, days before all heck broke loose, had warned that Chinese stocks are the “Largest Pump-and-Dump in History.”

So “buy the dip?” Maybe not. Morgan Stanley warns: “In fact, we think the balance of probabilities is that the top for the cycle of Shanghai, Shenzhen, and Chinext has now taken place.” The report pointed at four factors – “a) increased equity supply, b) continued weak earnings growth in the context of economic deceleration, c) high valuations, and d) very high margin debt to free float market capitalization” – that could hammer the markets down another 30% over the next 12 months.

No. 3: Canada is running at a bifurcated or even trifurcated economy. Its oil patch, particularly the province Alberta, and the oil capital Calgary are getting whacked by the oil price plunge and its side effects. As I wrote earlier today, economists worry – but don’t see the signs yet – of “full-fledged contagion to the rest of the country” [Canada’s Oil Patch Goes Into Convulsions, Business Confidence Plunges to Financial Crisis Lows].

On the other side of Canada’s bifurcated economy, Vancouver and Toronto are on top of an exciting housing bubble of enormous proportions. The banks are up to the gills into it, though this time it’s different, because when it all implodes, it won’t impact the banks much because Canadian households, despite their dizzying debt-to-income ratio, aren’t going to just let go of their mortgages, like many US borrowers did during the housing bust. They’ll keep making their payments, no matter what.

Oh, and the incredible condo bubble in Toronto? Unsold new condos have spiked to an all-time record, while the industry pretends to be in denial [Toronto’s Epic Condo Bubble Suddenly Turns into Condo Glut].

And that India and Japan are on the same level of concern with our corporate heroes as Canada makes us worry even more about Canada.

1 thought on “These 3 Countries Worry Corporate America the Most”