Earlier today, John O’Connell, CEO of Davis Rea, spoke to Canada’s BNN from what may be Greece’s top tourist attraction, the island of Santorini, to give a sense of the “mood on the ground.” Not surprisingly, his feedback was that, at least as far as tourists are concerned, nobody is worried. After all, it is not their funds that are capital constrained plus should the Drachma return as the local currency, the purchasing power of foreigners will skyrocket.

What he did point out, however, that was quite notable is the diametrically opposing views between old and young Greeks when it comes to Grexit. According to O’Connell, “the old people want to vote for Europe cause they have a lot to lose, they have their pensions, but the younger population – they are already poor, they are already unemployed – and they don’t have much to lose. Their attitude is it’s going to be tough, it’s already tough, and so why not just move on go back to the Drachma, and they’re ok with that. Their attitude is in 5 to 10 years I’ll be better off. They believe there’s a lot of misinformation. They believe they’re being pressured by European countries particularly Germany that are holding them to very difficult terms.”

He continues: “whatever the polls may way, the young population is going to vote to leave the Euro and deal with the problems long-term.”

Finally, his take on capital controls and tourism: “You are going to see a big, big drop off in tourism because people are not going to want to come here. People are going to worry that if people do come here with a lot of Euro, are they going to be allowed to leave with those Euros. It’s going to have a dramatic impact on the Greek economy at some point, a lot of the people that live here are underestimating how bad it could get in the short term.”

There have been some people that worry that the military may actually get involved. It wouldn’t surprise me – there are some people in Greece that have raised the whole prospect of potential civil war.

Who would benefit the most from a Greek civil war? Why the biggest exporter of weapons in the world, of course: the United States.

Full video after the jump. 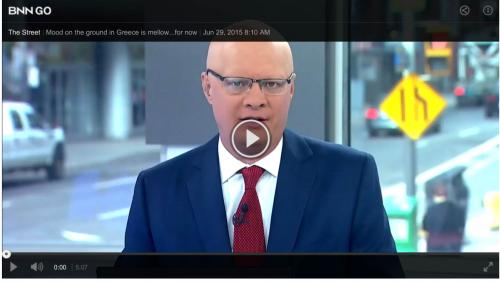 When you see civil war break put in France, Italy AND Germany the start of WW3 is close.

1 thought on “The Mood On The Ground In Greece: “Some Have Raised The Prospect Of Civil War””