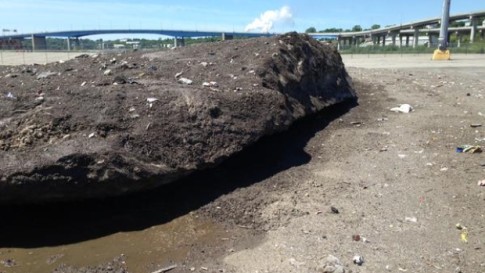 27 June 2015 – Remember that awful winter that hit New Brunswick? Well, some of that snow hasn’t disappeared yet.

In Saint John, the remnants of some of the 20,000 truckloads of snow haven’t fully melted, as evidenced by the pile located at Long Wharf along the city’s harbor, just one of the many snow dumps used by the city.

Up close, the dark-grey pile is littered with garbage including coffee cups, bricks, bottles,  even a pillow.

In February, the city declared a state of local emergency as it was unable to deal with the amount of snow clogging city streets.

By the end of winter, Saint John’s 52-year-old snowfall record was shattered.