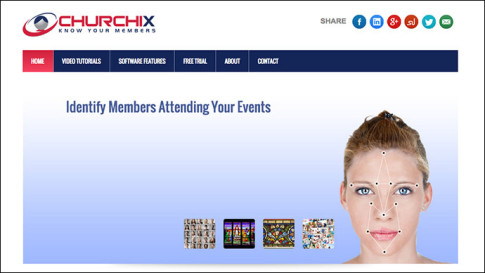 Churches are joining the widening club of entities using Big Brother-style facial recognition software to track people. And they are doing so in secret, according to a producer of a specialized program designed for religious institutions.

In just four months, some 30 churches around the world, from Indonesia and India to Portugal and the US have started using facial recognition software called Churchix, says Moshe Greenshpan, the CEO of Israel- and Las Vegas-based company Face-Six that sells the technology. The program is a derivative of other products his company offers to clients, such as law enforcement, public venues and retail outlets.

“In the beginning I was surprised. We never thought of churches as potential clients, but we now understand the need. Most churches do already keep track of their members,” he told IBTimes UK.

Churchix uses CCTV footage or photos to match churchgoers against a database of high-resolution pictures that a church has to compile on its own. The software can be used to monitor attendance numbers, and alert church officials if some members stops coming to services. It can also screen for people banned from the church, Greenshpan explained.

He would not identify the churches that use the software, citing the controversial nature of the technology. Facial recognition is considered too invasive a tool by privacy advocates, allowing governments and companies to track people offline on the same scale that electronic surveillance is conducted today.

Churchix works better when used openly, with visitors passing a ‘checkpoint’ and voluntarily registering by looking into a camera. This would give 99-percent accuracy, the company says. But apparently the users prefer not to draw unwanted attention to the tracking software.

“I don’t think churches tell people,” Greenshpan told Fusion TV channel. “We encourage them to do so, but I don’t think they do.”

Greenshpan, however, insists his software is not a game changer, as churches have been tracking their congregants manually for ages. Churchix only makes it possible for medium and large churches, he explains.

Facial recognition technology and other biometric identification tools are outpacing attempts to regulate them. In the US, only Illinois and Texas have laws that demand consent of the people, and in both cases they predate the emergence of facial recognition.