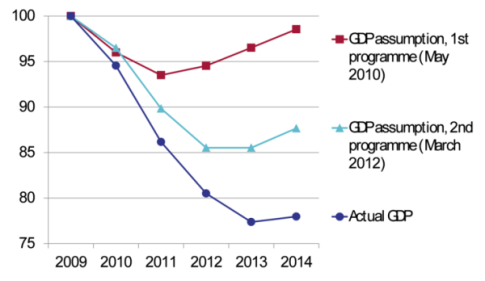 – Greek GDP: The Shocking Reality Vs IMF Forecasts; And Who Is To Blame For The Greek Implosion (ZeroHedge, June 21, 2015):

With a Greek default, shortly followed by a Grexit, a collapse of the “irreversible union” (but… but… “political capital“), and ultimately the end of the latest European monetary union experiment (the latest in a long and illustrious series of prior failures) now seemingly imminent, the blame game has begun. As the NYT noted overnight “the recriminations that would then fly would be so bitter that they would inflict a second round of damage.”

But who is really to blame?

Simple: anyone and everyone who willingly and voluntarily was complicit with the great “can kicking” bailout fiction of the past 5 years, and decided to stick their head in the sand when during the first bailout of Greece, followed promptly by the second bailout (and default to private creditors) when despite our (among many others) outcries that these piecemeal rescues do nothing to fix the underlying insolvency of Greece which requires a grand balance sheet reset, one where the Greece revenues and outlays are sustainable in the long-run and not just until the next all time high of the S&P500, everyone – from the top unelected European technocrat to the lowliest IMF and Deutsche Bank analyst peddled a lie that “Greece (and by extension Europe) was fixed.”

For those still unconvinced that it was an absolutely epic lie, because while stocks were soaring as the lies piled up higher and higher, this is what happened. From Bruegel which is shocked, shocked to find that Greek GDP fell “much more than was foreseen in the adjustment programmes“:

After 2010 the collapse of the Greek economy accelerated. GDP fell much more than was foreseen in the adjustment programmes. The big question is whether all of this collapse was inevitable given the unsustainable character of the pre-crisis growth model of Greece, or if the two Troika programmes exacerbated the output fall.

Yes, it was inevitable, because just like the Troika pretended to reform the insolvent Greek balance sheet, so Greece pretended to implement structural reforms. Visually:

That this would happen was obvious to all but the most pathological Eurofanatics. They can be excused: they were ideologues and demagogues, whose failed vision will lead to at least one lost Greek generation.

It is all those others, who knew that what was shown above was coming and still pushed for every deal that would delay the inevitable and only benefit Europe’s banks and lead to massive shareholders gains at the expense of one European nation’s terminal collapse, who are truly at fault.

It is those people from whom the Greek population, which now truly has nothing left to lose, should demand an “explanation” if nothing more.

2 thoughts on “Greek GDP: The Shocking Reality Vs IMF Forecasts; And Who Is To Blame For The Greek Implosion”