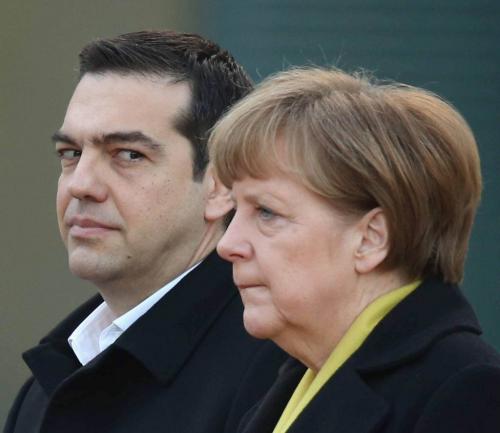 – Greece Told To Have A Deal Ready Before Monday Meeting; Tsipras Submits Revised Plan With No Pension Cuts (ZeroHedge, June 21, 2015):

Update: the farce must go on because according to Bloomberg the “final final” Greek proposal never made it, and was, ahem, lost in tranmission: EU HAS RECEIVED NO NEW PROPOSAL FROM GREECE YET: EU DIPLOMAT – BLOOMBERG

With just under 24 hours until Monday’s final summit after which even JPMorgan now agrees the ECB will be forced to use a nuclear option and limit or cut Greek ELA thus imposing capital controls as a “negotiating tactic”, earlier today both France and Germany told Greece it must have a reform deal agreement with the Troika finalized and delivered before a crucial leaders’ summit between Athens and its creditors on Monday; in other words before trading opens on Monday.

According to the FT, with the Greek cabinet meeting on Sunday to consider compromise proposals, François Hollande and Angela Merkel both telephoned Alexis Tsipras, the prime minister, to remind him he needed a “staff level” agreement with the European Commission, IMF and ECB ahead of the summit.

They told him the summit was not for “negotiations” — which anyway would be all but impossible in a forum including all 19 eurozone members — and urged him to reach a deal with the institutions…. If a deal is reached, the two leaders said the parties could then start discussing a third bailout at the summit. France is believed to be open to discussing debt relief and restructuring for Athens, a top priority for Mr Tsipras, whose radical leftwing government won office in January setting Greece on a collision course with its creditors.

As a result, the Greek cabinet has been summoned to a meeting at Tsipras’ Maximos Mansion residence on Sunday morning for a last-ditch meeting to hash out the government’s strategy. Here they are expected to discuss how Mr Tsipras can bridge his two seemingly intractable electoral mandates: to end austerity and block further cuts in spending while also satisfying creditors’ demands for reform to keep Greece in the Eurozone.

And while the Greek negotiating position is one where any spending-cut compromise will be seen as a defeat for Tsipras – just yesterday the Minister of State Nikos Pappas used an interview with the country’s Ethnos newspaper to reiterate the government’s firm opposition to cuts to pension plans or wages – moments ago the Greek Prime Minister presented Greece’s proposal for a deal during phone talks on Sunday with German Chancellor Angela Merkel, French President Francois Hollande and EU Commission President Jean-Claude Juncker, according to Reuters.

“The prime minister presented the three leaders Greece’s proposal for a mutually beneficial agreement that will give a definitive solution and not postpone addressing the problem,” it said in a statement.

Bloomberg has the bulk of the proposed details:

In summary: promises for higher revenues (which is problematic considering the Greek track record and the fact that it just spent 5 months haggling with the Troika instead of implementing even one actual reform) and none of the pension cuts so demanded by the Troika. Why are the country’s pensions such a sticking point?  To paraphrase the IMF’s Olivier Blanchard from his blog post last weekend:

Why insist on pensions? Pensions and wages account for about 75% of primary spending; the other 25% have already been cut to the bone.  Pension expenditures account for over 16% of GDP, and transfers from the budget to the pension system are close to 10% of GDP.  We believe a reduction of pension expenditures of 1% of GDP (out of 16%) is needed, and that it can be done while protecting the poorest pensioners.

For Tsipras pension cuts are clearly a non-starter because as we said last week “he would almost certainly be promptly swept from power as Syriza renegs on its most solemn pre-election vow.”

This is what else we said:

With Greek tax revenues imploding and the hope of even a 1% primary surplus long gone as a result of the Greek economy grinding to a halt. Which in turn means that in order to be sustainable (and whatever happened to the IMF’s “sustainable” 2022 Greek debt/GDP forecast anyway), Greece has no choice but to cut both wages and pensions.

Only the Greek government knows that such a move would be the start of the endgame, and will lead to either another technocratic government, a puppet of the Troika, or to an even more extremist government, this time from the ideological right.

Overnight, Germany’s FAZ agreed with that assessment, noting that Greece creditors estimate country’s budget gap of €2b to €3.6b this month. The shortage won’t allow Greek government to repay IMF (even with a new injection of cash by the IMF) unless it cuts pensions, salaries as expenses amount to €2.2b by end of June.

Based on the “final final” Tsipras proposal, these cuts are still missing,which in turn is a basis for a “non-starter” response by the Troika.

As a result, Greece just played its final bluff. And now, as Yanis Varoufakis also wrote in in Germany’s Frankfurter Allgemeine Zeitung, Angela Merkel faces “a stark choice” ahead of the crucial summit of European leaders in Brussels on Monday.

In other words the Greek parliament has washed its hands of the Greek fate, and a Grexit – if it happens – will be blamed on Merkel, if only in Greece.

As a final reminder, with the fate of Greece clear to pretty much everyone, the only question is who is served with the blame for the unwinding of the “unbreakable” European monetary union. The game of final posturing continues.

4 thoughts on “Greece Told To Have A Deal Ready Before Monday Meeting; Tsipras Submits Revised Plan With No Pension Cuts”