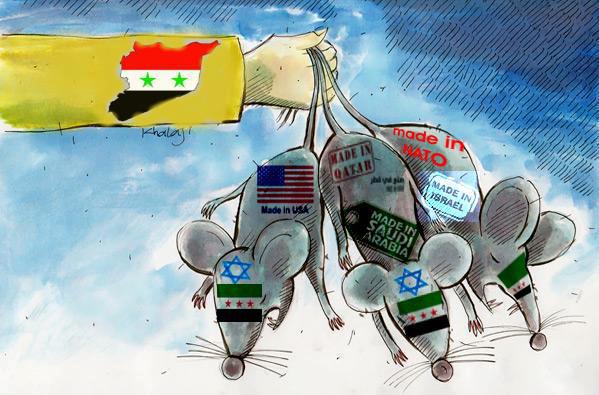 Russian President Vladimir Putin reaffirmed Russia’s support for Syrian leader Bashar al-Assad on Friday and said he opposed any use of external force to try to end the Syrian civil war.

Putin showed no sign of wavering in his policy of trying to shield Assad from pressure from the West in a 4 1/2-year-old conflict that has killed more than 200,000 people and displaced millions.

“Our fear is that Syria could plunge into the same situation as Libya and Iraq,” Putin said in response to questions at Russia’s annual economic forum in St Petersburg. “We don’t want that … in Syria,” he said.

Putin said the US policy to counter Islamic State, which controls large areas of Iraq and Syria, had so far had “lamentable” and “tragic” consequences.

“The United States supports Iraq [and its army]. With two or three strikes IS has captured so many arms … [that] now IS is armed better than the Iraqi army. And all this is happening with the support of the United States,” he said.

Washington has backed rebels seeking to oust Assad and is now trying to build a moderate Syrian opposition to fight IS.

Putin reiterated that it is up to the Syrian people to decide the fate of Assad, adding that Russia would not call on him to step down. But, he said Russia would urge Assad to work with a “healthy” opposition on political reforms.

“We are ready to work with the president to ensure a path towards political transition so as to move away from an armed confrontation. But that should not be done with the use of force from the outside,” he added.

On Iran, Putin said he believed world powers and the Islamic republic would soon sign an agreement curbing Tehran’s nuclear program in exchange for easing sanctions.

“I think the signing should take place in the nearest future,” he said, adding that the implementation of an agreement would take about six months.