“Everything these days seems to be “Smoke & Mirrors”, but the reality is that the PTB must somehow detract our attention from the fact their FIAT monetary system which has turned into a debt based monster, incapable of honesty or economic clarity, and must somehow either default or collapse soon.

Kicking the can down the road to delay the inevitable, using QE for as long as it takes, whilst the Alternative Media & Vladimir Putin diffuse the false arguments for war.

However, he is growing weary & frustrated at the continuous poking , and the Banks are becoming edgy.

Should there not be a War by the time the financial bubble of debt explodes, the illegality and futility of the banksters’s acts will be exposed even to Joe BigMac,
That is unacceptable, so, they have estimated the cut off date to coincide with the third blood moon of the Shemitah, or approximately the 23rd September 2015.

Anyone wanting to risk their savings on the same 7 year cycle that included the 9/11 event and the 2008 financial collapse, is a brave man, considering the next step will be confiscation, or, officially “Bail-in”.” 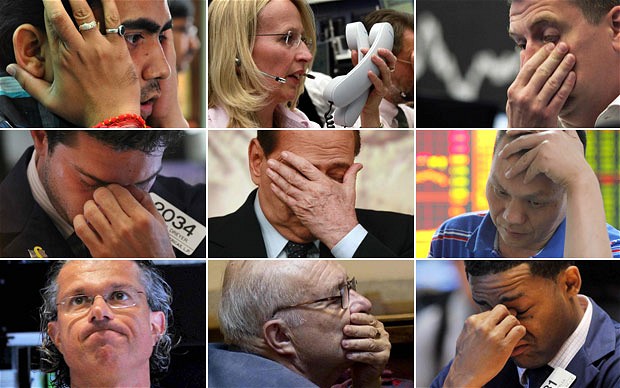 It may be time to money under the mattress. High profile fund managers explain how to prepare for a ‘systemic event’

The manager of one of Britain’s biggest bond funds has urged investors to keep cash under the mattress.

Ian Spreadbury, who invests more than £4bn of investors’ money across a handful of bond funds for Fidelity, including the flagship Moneybuilder Income fund, is concerned that a “systemic event” could rock markets, possibly similar in magnitude to the financial crisis of 2008, which began in Britain with a run on Northern Rock.

“Systemic risk is in the system and as an investor you have to be aware of that,” he told Telegraph Money.

The best strategy to deal with this, he said, was for investors to spread their money widely into different assets, including gold and silver, as well as cash in savings accounts. But he went further, suggesting it was wise to hold some “physical cash”, an unusual suggestion from a mainstream fund manager.

His concern is that global debt – particularly mortgage debt – has been pumped up to record levels, made possible by exceptionally low interest rates that could soon end, and he is unsure how well banks could cope with the shocks that may await.

He pointed out that a saver was covered only up to £85,000 per bank under the Financial Services Compensation Scheme – which is effectively unfunded – and that the Government has said it will not rescue banks in future, hence his suggestion that some money should be held in physical cash.

He declined to predict the exact trigger but said it was more likely to happen in the next five years rather than 10. The current woes of Greece, which may crash out of the euro, already has many market watchers concerned.

Mr Spreadbury’s views are timely, aside from Greece. A growing number of professional investors (see comment, right) and commentators are expressing unease about what happens next.

The prices of nearly all assets – property, shares, bonds – have been rising for years.

Although it feels counter-intuitive, this trend of rising prices should continue if economies remain weak, because it gives central banks licence to keep rates low and to carry on with their “quantitative easing” programmes.

Conversely, if the economy does pick up and interest rates need to rise, the act of doing so is likely to stall the economy and force them to be reduced again. Once more, demand for those mainstream assets would be rekindled and the asset boom continues.

But then there is the shock event. Daily Telegraph columnist Jeremy Warner also captured some of the concerns this week when he wrote that the trigger for an “inevitable correction” could come from “a clear blue sky – a completely unanticipated event”.

How are fund managers preparing for this gloomy possibility?

Mr Spreadbury sticks to bonds because of the remit of his funds. Within that world, he said a shock to the system would cause a flight to safety and the price of British government bonds, or gilts, would rise sharply. He also holds bonds of companies that would be most protected in times of turmoil – water companies, power network operators – and those where the bonds are secured on a solid asset, such as land or buildings.

Examples include Center Parcs and Intu, which owns shopping centres.

Marcus Brookes, another well regarded fund manager who looks after billions of pounds worth of investments, is less constrained in where he invests, because of the different remit of his funds. Schroder Multi-Manager Diversity, for example, can pick and choose between assets.

Mr Brookes said the probability of a major shock event was small but even he holds 29pc of the Diversity portfolio in cash, a huge proportion compared with most funds. This decision is due to his concern that bonds are overvalued and may fall. He aims to deliver returns of 4pc above inflation so can’t afford to put too much in assets that he believes will lose money.

“The problem is that people are struggling to work out how to diversify if QE programmes stop,” he said.

Mr Spreadbury added: “We have rock-bottom rates and QE is still going on – this is all experimental policy and means we are in uncharted territory.

“The message is diversification. Think about holding other assets. That could mean precious metals, it could mean physical currencies.”

1 thought on “‘It’s time to hold physical cash,’ says one of Britain’s most senior fund managers”