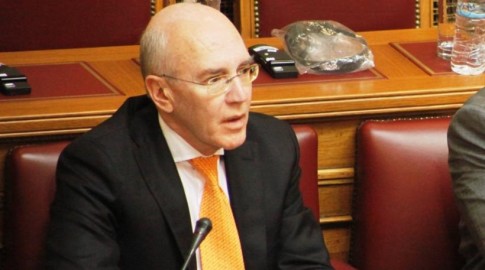 Greece’s former representative to the IMF, Panagiotis Roumeliotis, has testified that Greek journalists attended seminars funded by the IMF and were instructed to present the IMF in a favorable light.

In what can only be described as a shocking testimony, Greece’s former representative to the IMF, Panagiotis Roumeliotis, in front of the special parliamentary committee on the Greek debt, said that several Greek journalists were “trained” in Washington D.C. in order to support the positions of the IMF and the European Commission in Greek media.

According to Roumeliotis, the seminars and training classes took place in Washington D.C., as well as various sessions taking place in Greece.

Roumeliotis refused to disclose the names of the journalists involved, in what can only be described as overt and excessive western propaganda, bordering on illegal actions undertaken by the IMF and European Commission given the state of Greece’s debt burden.

Parliament President and head of the committee, Zoe Konstantopoulou, noted that the committee investigating Greece’s debt would seek to discover the names of the journalists that took part in Washington’s training sessions.

Roumeliotis noted that when he was in Washington D.C. he accidentally met with Greek journalists who told him that they were invited to attend seminars on the function of the IMF. He said that the committee can ask the organization’s Director of Communications Department, Gerry Rice, for a list of journalists’ names who attended such seminars in D.C.

“In Greece, certain individuals who work for the mass media were contracted to conceal the fact that the Greek debt was not sustainable.”

“Christine Lagarde and other high officials at the IMF contacted me before my testimony before the committee to remind me that members of the IMF are immune from prosecution.”

Konstantopoulou named television journalist Yiannis Pretenteris as one of the journalists attending the IMF classes. According to Konstantopoulou, the popular Greek journalist admitted in his book that he attended the IMF seminars.

Roumeliotis noted that many journalists fell victim to the IMF’s misinformation campaign, and that the omission of the fact that the debt was not sustainable was detrimental to public interest.

Roumeliotis went on to say that several economists and university professors also attempted to convince the public that the debt was sustainable…adding that he puts them in the same category as the journalists.

Who is Panagiotis Roumeliotis: A Greek economist, academic, banker and politician who served as Minister of National Economy, Minister of Commerce, Member of the European Parliament for PASOK and as Greece’s representative at the International Monetary Fund.