Yesterday evening, after what had been a dramatic surge in the Greek bank run which has resulted in over €3 billion in cash withdrawn through Thursday night, the Greek central bank requested an emergency cash dispensation from the ECB under the country’s Emergency Liquidity Assistance program, just one day after the ECB granted the latest €1.1 billion expansion in the ELA. Rarlier today, in an unscheduled session, the ECB did as requested, however it granted Greece far less than the amount it sought, and according to MarketNews reports, the ECB gave Greece just €1.8 billion in addition funds.

This means that Greek deposits have declined by over €5 billion in the past 7 days alone, as indicated by the surge in the ELA from €80.7 billion on June 10 to €85.9 billion currently.

Worse, as Reuters reported moments ago, on Friday alone there was another €1.2 billion in deposit outflows which means that the entire ELA increase has already been used up, and Greece is again facing the abyss.

Finally, the one question on everyone’s mind, can Greek deposits hit parity with total ELA as we hypothesized a week ago? The answer – no. As the following chart shows, Greece currently has about €95 billion in ELA eligibility and just around €120 BN in deposits left. 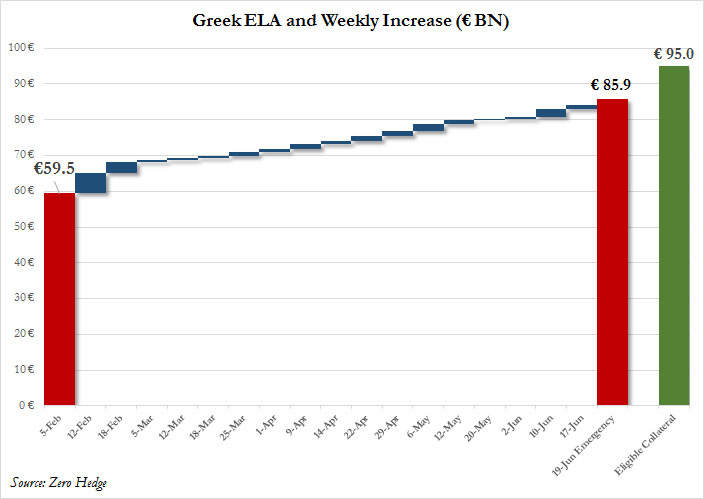 Which means that even the “well-meaning” ECB can handle at most 7-8 days more of deposit outflows before it shuts off the Greek ELA account and capital controls are finally imposed leading to the next, far more unpleasant phase of the Greek drama.