For the 2nd time in a month, China’s Shanghai Composite entered a correction, plunging 10% from local highs as headlines of delayed IPOs and large-scale steel ‘dumping’ at a loss combined with global monetary policy fireworks and European event risks. The rest of the more highly sensitive and manic Chinese equity markets are also plunging with CHINEXT and CSI-300 down over 7% in the last month (and 17% from the highs in the case of the former).

Chinese stocks have gone nowhere in a month… 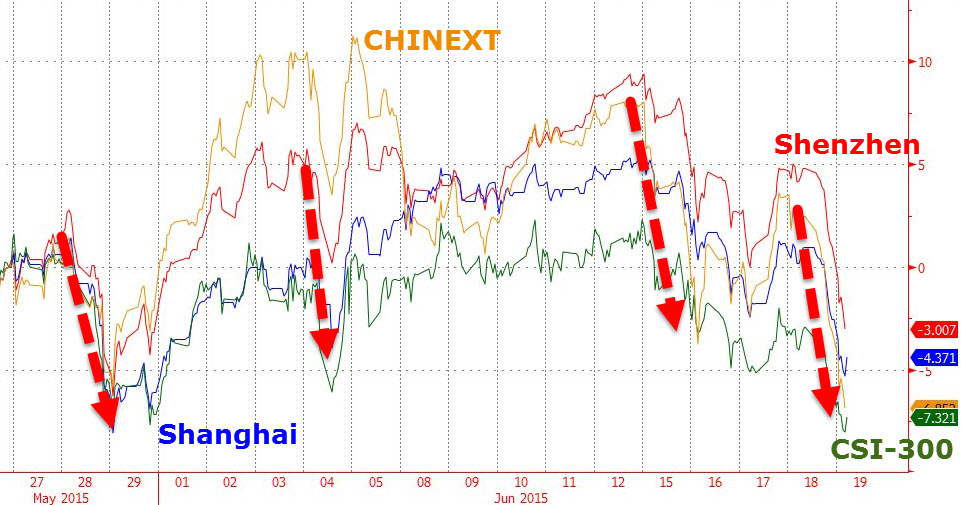 Before you read on – STOP and look at the volatility we are talking about here… multiple 10 to 15% swings in major stock indices in the last month. Compare that to the US market’s idiocy where we have seen no vol whatsoever in the last six months.

Of course – as US equities roared to record highs today in the face of the most serious Grexit fears yet and a Fed that just admitted the economy is FUBAR – Chinese stocks are for once derisking responsibly (for now).

Some Chinese steelmakers are selling their output abroad at a loss, according to traders and a producer, as a group of global industry bodies urged governments to take action over rising shipments from China.

Chinese mills had sold steel overseas at a loss of up to 200 yuan ($32) a tonne and cut the export price of hot-rolled coil by 5 percent to $340-$350 a tonne, free-on-board basis, this week compared to last week, according to traders and a producer in Hebei, China’s top steel producing province.

These mills were also selling at a loss to the domestic market, they said.

“The domestic market is too weak to consume high output and our prices are competitive, so some mills are still keen to step up exports, hoping to ease high inventories and maintain market share,” said a senior official at a privately owned mill in Hebei.

China exports around 10 percent of its annual steel output from hundreds of steelmakers and it was unclear the quantity of steel the traders and official were referring to.

Eight steel associations from Asia, the Americas and Europe said in a joint statement this week all regions were “suffering from a dramatic increase in unfair steel imports that is fueled by massive global overcapacity.”

“Looming over it all is China, whose massive and increasing overcapacity in an era of slowing growth has already destabilized the global steel market and trade flows,” the statement said.

Two words – malinvestment and over-capacity – sum up the entire farcical surge in China, and as George Soros warned, if the reforms Xi is pushing fail, his best last solution will be war to keep a nation united and working for a common ‘good’.

And a bond sales canceled:

Which just adds to the IPO pain we noted earlier… 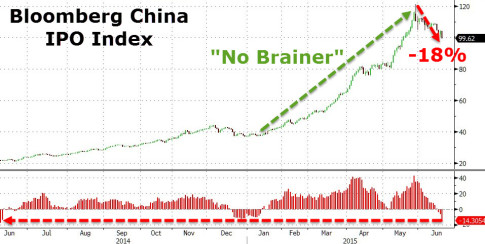 But it’s a “no brainer” remember…