“If the federal government were to try and do something like [confiscation], the reality is: There is a motto in the office of almost every state legislator in Texas, and it’s a flag that we have [from the Texas Revolution], it’s below a cannon and what the motto says is, ‘Come and Take it.’“ 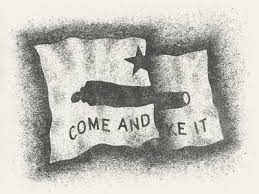 As the mainstream media begins to come to terms with just what Texas’ decision to repatriate its gold from the Federal Government in its own Gold Depository, the details of Republican State Rep. Giovanni Capriglione’s bill protecting gold from confiscation become clear…

In an interview with The Epoch Times, Caprigilione explains why he pushed the bill and its far-reaching implications…

Epoch Times: What did you do to make the bill pass?

Giovanni Capriglione: I grabbed the banner last session. I was a freshman and it was difficult. Part of the problem was that it has a lot of verbiage that had nothing to do with law. Things like the case of an economic meltdown.

This is a principle part of why the bill was created, but it made it a distraction trying to pass the bill. Because then you get into: Do you think the economy is going to collapse, blaming the president, blaming the banks. What I did in this version of it, I stripped all kinds of stuff out other than the bill itself.

Epoch Times: Why did you go for it?

Mr. Capriglione: I have a vision, I would like for Texas to compete with Manhattan or the exchanges in Chicago. Here in Texas we have oil, we have natural gas, we have our own electric grid. To me having a bunch of metal commodities in the mix is something else that helps Texas to be able to become a marketplace for a lot of different items. Part of the idea of the depository is just another Texas thing. I’m still a little stunned that it happened.

I wrapped all of it together and I love to do economic development. I just want Texas to really be able to grow economically.

Former Texas Gov. Rick Perry previously said, “We are telling the whole entire world that Texas has a billion dollars worth of gold.” Gov. Abbott too, wants to attract businesses to our state.

Epoch Times: What were some of the difficulties?

Mr. Capriglione: My initial goal was to create a state everything, to have that completely run by the state. The issue with that was that it became a budget item. They were not keen on developing a completely new piece of [transaction] software. If the state had done it from scratch it would have just been too large.

I worked to do this without a fiscal note or a budget expense. We were able to do that by privatizing a significant portion of the depository. So we don’t have to build one, someone can go and say: we want to run it. We don’t have to run our own electronic software, someone else smarter than the state within the business can and will—and probably already has—developed the software to run [this operation].

This time I got put on the investment and financial services committee where this bill went through. It made it a lot easier to get it through the system. I was pretty shocked it passed the house with 137 to 1.

Now our office is getting calls and people are offering their services. I got some very interesting high network individuals who are thinking about putting their gold in Texas now. The response has been really, really good.

Epoch Times:What do you say about the anti-seizure clause, do you think the federal government will interfere with the gold and silver stored in the depository?

Mr. Capriglione: I think that what we have done is completely constitutional, we’ve looked at precedents, I have looked at Article 1, Section 10 of the Constitution so I think we are in good standing.

If the federal government were to try and do something like that, the reality is: There is a motto in the office of almost every state legislator in Texas, and it’s a flag that we have [from the Texas Revolution], it’s below a cannon and what the motto says is, “Come and Take it.”