This was not supposed to happen: by now the Greek insolvency “can” should have been kicked, and the Greek government, realizing the money has run out for both the government and the banking system, should have folded to Troika demands, and allow the Troika money to return repaying obligations to the Troika in exchange for more spending cuts.

Instead, the “game theoretical” approach of bluffing until the end, and beyond, has put both countries in a corner from which neither knows how to escape, and with the “final deal deadline” passing this weekend we now have quotes such as this from the EU:

while in an op-ed due to be published today in German newspaper Bild, German Vice Chancellor and Economy Minister Gabriel has been quoted as saying that ‘the shadow of a Greek exit from the euro zone is becoming increasingly perceptible’ and that ‘repeated apparently final attempts to reach a deal are starting to make the whole process look ridiculous, there is an even greater number of people who feel as if the Greek government is giving them the run-around.” So time for another “final attempt” then:

Meanwhile, Greece digs in over its red lines:

And yet, in this climate of animosity between the IMF (which as a reminder walked out of talks last Thursday), and the Commission (whose amicable attitude toward Greece promptly soured over the past week), there is still one way Europe can promptly end the impasse.

As a reminder, on Friday when we looked at the latest Greek one-day outflow which saw another €600 million leave local banks, we said that “next Wednesday is when a non-monetary policy board meeting of the ECB non-governing council will take place in Frankfurt where Draghi and company will discuss the issue of guarantees of Greek banks and perhaps the proposal for collateral “haircut.”

Earlier today, Deutsche Bank hinted at the ECB meeting as just the place where the ECB, which has until now stayed out of the ever more rancorous Greek spat, and in fact has buttressed may just invoke the nuclear option. From DB’s Jim Reid:

The ECB non-monetary policy meeting is also scheduled for Wednesday. George believes that a lack of progress on Thursday should see a more formal deadline put on Greece, beyond which capital controls will be implemented.

Which makes us wonder: with both sides digging in and unwilling to budge, will Europe revert back to its strategy from day 1, namely creating a slow initially, then fast bank run in Greece, one which leads to gradual then sudden capital controls, resulting in civil discontent and disobedience and ultimately, a violent overthrow of the Greek government.

The best way to achieve all of that would be to use the aptly named Cyprus “blueprint” – after all, with the “successful” Cyprus capital controls already tested out, and with the Greece stalemate going nowhere and leading to a loss of credibility in the EU, it may be time for the ECB to do what it did on March 21, 2013 when it issued the following statement:

The Governing Council of the European Central Bank decided to maintain the current level of Emergency Liquidity Assistance (ELA) until Monday, 25 March 2013.

Thereafter, Emergency Liquidity Assistance (ELA) could only be considered if an EU/IMF programme is in

place that would ensure the solvency of the concerned banks.

So will Wednesday see an identical press release issued by the ECB, only with “Greece” instead of “Cyprus”? Because with the ECB’s emergency liquidity assistance already covering some 64% (call it two-thirds following the latest weekly outflows) of total Greek deposits… 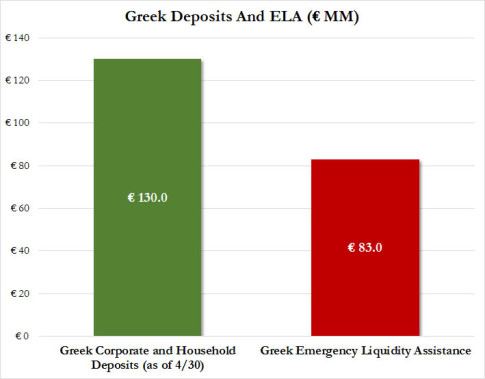 … if there is one way to bring the Greek “crisis” to a grinding halt, it would be to give the Greeks themselves the “option” of regaining access to their now “capital controlled” funds if and only if they “choose” a different government, like any true democracy?

Considering that according to the latest poll, for the first time a majority, or 50.2%, of Greeks want the government to accept the creditors’ proposals to prevent the country’s bankruptcy, this may be just the catalyst to push the population over the edge and to tell Tsipras that Europe has won?

3 thoughts on “Will The ECB Finally Use The Greek “Nuclear Option” This Wednesdsay?”