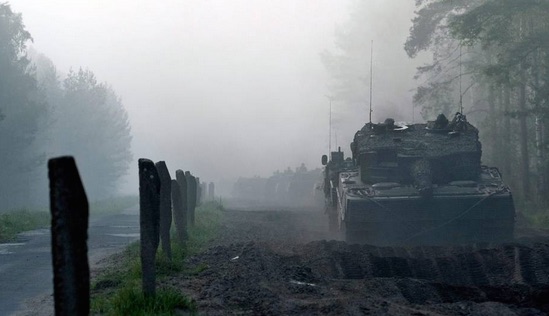 Cold War 2.0 is heating up week by week. In Ukraine, the fragile ceasefire struck four months ago in Minsk looks set to break down entirely with both the Ukrainian army and the Russia-backed separatists accusing each other of deploying heavy artillery in contested areas.

Meanwhile, GOP presidential candidates in the US are getting set to hit the campaign trail with foreign policy at the forefront in terms of the issues voters are likely to focus on in the primaries. All candidates seem prepared to attack the Obama administration’s handling of what is predictably being billed as “Russian aggression”, with Hillary Clinton’s 2009 “reset” button media spectacle serving as the tie-in between the current administration and the presumed Democratic nominee. As for The White House, the President is looking to dust off the Cold War playbook by implementing a modern day “containment” policy in the face of what the West claims are illegitimate attempts by the Kremlin to redraw European borders by violating territorial sovereignty.

As if all of this wasn’t enough to bring back memories of a bygone bipolarity, over the weekend we learned that the US is now set to “store” heavy weapons in Eastern Europe in an attempt to ensure NATO can respond quickly in the event Russia decides to do a bit more annexing. To recap (via NY Times):

In a significant move to deter possible Russian aggression in Europe, the Pentagon is poised to store battle tanks, infantry fighting vehicles and other heavy weapons for as many as 5,000 American troops in several Baltic and Eastern European countries, American and allied officials say.

The proposal, if approved, would represent the first time since the end of the Cold War that the United States has stationed heavy military equipment in the newer NATO member nations in Eastern Europe that had once been part of the Soviet sphere of influence. Russia’s annexation of Crimea and the war in eastern Ukraine have caused alarm and prompted new military planning in NATO capitals.

Poland’s government is discussing with the U.S. the placement of heavy weapons on Polish territory, Defense Minister Tomasz Siemoniak said Sunday, amid jitters over Russia’s military moves in the region.

Since Russia’s annexation of Crimea from Ukraine last year, Warsaw has sought a permanent presence of U.S. troops in Poland and other countries in the former Soviet bloc that are now part of the North Atlantic Treaty Organization.

“The U.S. is preparing a set of various measures, and among them the placement of heavy weaponry in Poland and other countries will be very important,” Mr. Siemoniak said.

“It’s relatively easy to move soldiers. It would be good, however, if the equipment was near the area of potential threat,” Mr. Siemoniak said.

Mr. Siemoniak said a rotational presence of U.S. forces would be maintained at least until the end of 2016.

Needless to say, Moscow — which has been quick to condemn recent NATO snap drills and war games — is not pleased with the prospect of more US weapons on its doorstep. Via Reuters:

Stationing heavy U.S. military equipment in the Baltic states and eastern Europe would amount to “the most aggressive step by the Pentagon and NATO” since the Cold War, Interfax news agency quoted a Russian Defense Ministry official as saying on Monday.

“Russia would be left with no other option but to boost its troops and forces on the western flank,” General Yuri Yakubov was quoted as saying.

With everyone from Senate war hawks to billionaire philanthropists advocating for lethal aid shipments to Kiev, this latest escalation is likely just the beginning of what could morph into a full-on proxy war between the West and Moscow.