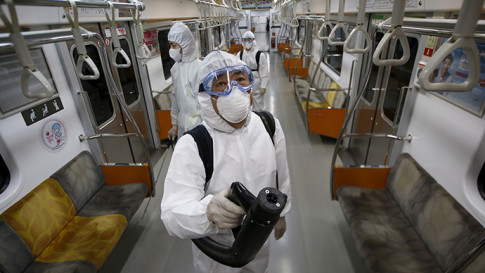 Hong Kong issued a red alert and advised against traveling to South Korea, where an epidemic of Middle East Respiratory Syndrome (MERS) is gaining pace. The virus is spreading despite attempts to contain the outbreak.

In Korea, the number of infected people passed 100 this week, reaching 122 on Thursday. Tenth patient died from the disease, health officials said on Thursday. Most of the victims are elderly patients with other health problems unrelated to the virus. Over 3,250 people remain in quarantine.

Two people in Hong Kong who traveled to South Korea recently are being tested for possible MERS contagion, the authorities said on Thursday.Previously 31 people were tested negative in Hong Kong.

Earlier a man tested positive for the disease in China after coming from S. Korea, and a man in Taiwan was taken to hospital with symptoms consistent with MERS.

South Korean authorities are trying to stop the spread of the virus by closing schools and canceling public events. Neighbors in the region are scaling down tourist travel to South Korea, with Hong Kong alone scrapping 600 tours to the MERS-hit country.

Macau issued an advisory against traveling to South Korea.

S. Korean President Park Geun-hye postponed her visit to the US, which was scheduled for June 14-18. Park decided not to leave the country in a time of crisis, especially since the S. Korean government currently has no prime minister.

MERS most likely spread to South Korea from Saudi Arabia, where the virus was first identified in 2012. At least 448 deaths are attributed to it, most of them in the Middle East, according to the World Health Organization numbers. The Korean outbreak is the largest so far outside the Middle East.

The virus is of the same coronavirus family that caused a massive epidemic in China in 2003 from severe acute respiratory syndrome (SARS). So far there is no vaccine for MERS.

Regional concerns about the MERS epidemic come as increased international traffic in a globalized world makes contagious diseases more dangerous. The most-publicized recent outbreak – the Ebola virus in West Africa – was actually caused by a strain of the virusno more virulent than the first recorded epidemic in 1976, according to research published this week by the National Institutes of Health.

But the connectivity of the modern world and authorities’ hesitation to enforce quarantines to avoid economic harm, allowed Ebola to spread, causing at least 11,000 deaths, a record for the disease.