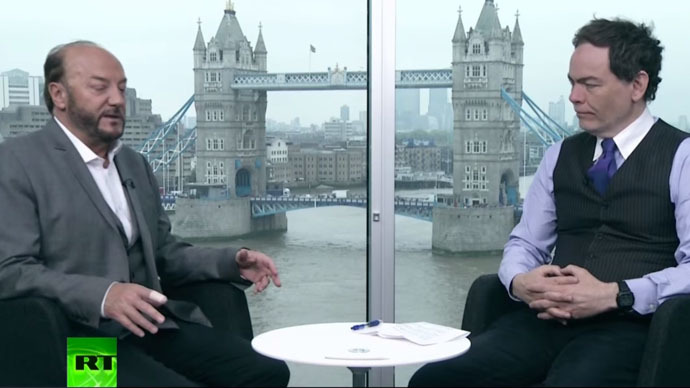 If I am elected Mayor of London @maxkeiser will be my chief economics advisor. Mr Banker take note….

Galloway, who lost his parliamentary seat in May, had previously told Sky News he would only consider running for mayor if he failed to hold his Bradford West seat.

“I won’t run for London Mayor if I am reelected on 7 May. If I am not reelected I will run. It’s as clear an answer as I can possibly give,” he said.

Speaking to RT, Keiser said one of the main focuses of a Galloway-run London would be clamping down on financial crime in the City.

He said keeping the City of London Police Force “accountable for the crime wave in the City these past 10 years is an excellent start in bringing the rule of law back to UK’s banking sector.”

“George and I have been talking about this for several years. With George as mayor we can get the job done of eliminating corrupt City bankers and regulators and in so doing, pave the way for more jobs, more growth, and a more diversified economy; one that does not rely so much on financialization and speculation,” Keiser added.

On June 28, Galloway told LBC Radio he hoped to emulate the Greek anti-austerity party Syriza in the mayoral election.

“[We are in] a period of austerity for the mass of the people, but not for the wealthiest, the most powerful.”

“The people in London who feel that they are forgotten by the mainstream political class will find a voice in me,” he said.

He did not give any details away about the contents of his manifesto, but said that housing was a huge priority for the capital.

“Housing is the major issue. The fact that no public housing is built, [and] that the Cameron government is committed to housing association homes being sold off, and of course we all know they won’t be replaced by social housing.”

Galloway is very much an outside hope for London Mayor, as he will be up against candidates from the UK’s main political parties – the Conservatives, Labour, UKIP and the Liberal Democrats.

The Respect Party candidate’s challenge is likely to split the anti-austerity left vote in the mayoral election, however, as the Green Party and the Trade Unionist and Socialist Coalition, two parties that stood in hundreds of parliamentary seats across the UK in the general election, are also likely to stand candidates.