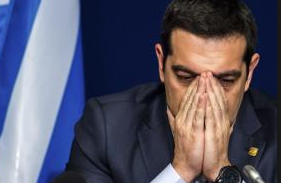 We’ve been saying for months that the troika’s ultimate goal in negotiations with Greek PM Alexis Tsipras is to use financial leverage to force Syriza into abandoning its campaign mandate, thus sending a strong message to the EU periphery’s other ascendant socialists that threatening to disprove the idea of ‘euro indissolubility’ is not a viable bargaining strategy when it comes to extracting austerity concessions from creditors.

Over the past several days the political situation has come to a head with Tsipras expressing his extreme displeasure at the troika’s “coordinated leaks” and unwillingness to give even an inch on what the PM calls “absurd” demands.

Meanwhile, Syriza has splintered with the far-left faction demanding a return to the drachma and a default to the IMF. We’ve contended that Tsipras will not be willing to go that route and risk an economic meltdown that would likely see him lose power altogether. The more likely scenario, we have argued, is that Tsipras caves to the troika, compromises on the government’s ‘red lines’ (pension reform being the most critical) and risks a government reshuffle on the way to a third program, thus averting a euro exit and keeping Greece from descending into a drachma death spiral, even as the “solution” effectively strips the Greek people of their right to choose how they want to be governed — a tragically absurd outcome in what is the birthplace of democracy.

Sure enough, it appears as though this is precisely what will unfold over the coming weeks as Tsipras has now indicated he is willing to compromise on pension reform. Reuters has more:

Labour and pension reforms are believed to be among the big sticking points with Athens.

Die Welt cited participants in the negotiations as saying the prime minister had signalled he was ready to discuss pension cuts and a higher retirement age.

The Greeks has not yet submitted a concrete proposal, the paper added in a preview of an article to run in its Tuesday print edition.

And with that it will be missioned accomplished for the troika. The Greeks will remain debt serfs, Germany will have made its point and sent a strong message to the rest of the EU periphery, and the IMF… well, that’s still up in the air because Christine Lagarde has made it abundantly clear that the Fund does not wish to participate in perpetuating this ponzi any further unless Greece’s EU debtors agree to a writedown of their Greek bonds. Largarde and Draghi reportedly met with Merkel and Hollande in Berlin today, perhaps sensing that the charade is finally coming to an end.

The chiefs of the European Central Bank and the International Monetary Funded headed to Berlin for talks late on Monday with the leaders of France and Germany on how to proceed with Greek debt negotiations.

EU officials said ECB chief Mario Draghi and Christine Lagarde of the IMF were joining the German and French leaders, and the president of the European Commission, with the aim of reaching a joint position on how to negotiate with Greece.

Once again, here’s a flowchart which diagrams what comes next: 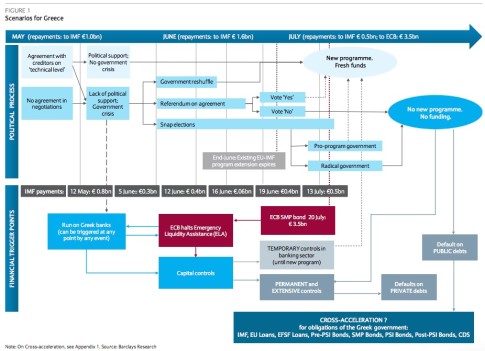 For those interested to know what these “absurd” demands from the troika are, we bring you the following from KeepTalkingGreece who has the story:

Creditors command and demand, Greece is willing but … some red lines cannot be set aside. Apart from that, creditors’ commands are anything but logical as their demands could be only described as crazy. Furthermore the creditors seem divided as to what they demand from Greece with the logical consequence that the negotiations talks have ended into a deadlock.

According to Greek media reports,

While the European Commissions wants austerity measures worth 4-5 billion euro for the second half of 2015 and the 2016, the International Monetary Fund raises the lot to 7 billion euro for 2016. The all-inclusive austerity package should include among others €2.7 billion cuts in pensions.

The Pensions Chapter is one of the thorns among the negotiation partners, and Greece would love to postpone it for after the provisional agreement with the creditors, call them: Institutions.

While it is not clear whether it is the IMF or the EC or both, it comes down to the command that

“Pensions should not be higher of 53% of the salary due to the financial situation of the social security funds.”

Pension for a civil servant (director, 37 years of work) should come down to €900 from €1,386 today after the pension cuts during the austerity years.

Of course, with the PSI in March 2012, Greece’s social security funds suffered a huge slap in their deposits in Greek bonds.

According to the Bank of Greece report of 2012, social security funds were holding Greek bonds with nominal value €18.7 billion euro. The PSI gave them a new look with a nice hair cut of 53.5%. Guess, how many billions euros were left behind.

If one adds the loss of contributions due to high unemployment, part-time jobs, uninsured jobs and the disappearance of full time jobs in the last 3-4 years, the estimations concerning the money available at the Greek social insurance funds are … priceless!

Another thorn in the negotiations is the Value Added Tax rates.

Do I hear you say that the austerity recipe imposed to Greece is wrong? You’re totally right.

But creditors insist on it and then wonder why the soufflé dramatically sinks once it comes out of the oven in Brussels.

*examples: the pensions issue is a huge labyrinth as full or reduced (early retirement) pension calculation depends on several criteria in addition to the 37 years +11,000 IKA-stamps scheme. There is no average and therefore there can be no average cuts.

Before the crisis, pension was 80% of the salary of the last 5 work years. Now it has come down to 60% of either last salary after the salary & wages sharp cuts or of the best salary. And creditors want it down to 53%! Go figure…

What is fact is that pensions in private sector sank at 26% in the last 3 years.