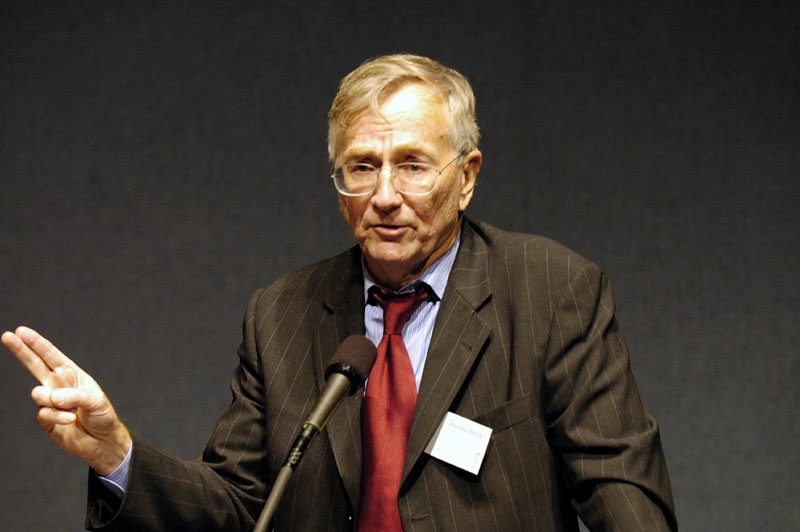 Seymour Hersh found himself in the middle of an F-5 shitstorm this week after breaking his biggest blockbuster story of the Obama Era, debunking the official heroic White House story about how Navy SEALs took out Osama Bin Laden in a daring, secret nighttime raid in the heart of Pakistan.

According to Hersh’s account, OBL was given up by one of his Pakistani ISI prison wardens—our Pakistaini allies had been holding him captive since 2006, with backing from our Saudi allies, to use for leverage. Hersh’s account calls into question a lot of things, starting with the justification for the massive, expensive, and brutal US GWOT military-intelligence web, which apparently had zilch to do with taking out the most wanted terrorist in the world. All it took, says Hersh, was one sleazy Pakistani ISI turncoat walking into a CIA storefront in Islamabad, handing them the address to Bin Laden’s location, and picking up his $25 million bounty check. About as hi-tech as an episode of Gunsmoke.

The celebrated Navy SEAL helicopter raid and killing of OBL was, according to Hersh, a stage production co-directed by the US military and Pakistan’s intelligence agency, who escorted the SEALs to Bin Laden’s room, pointed a flashlight at the captive, and watched the SEALs unload hot lead on the old cripple, turning him into spaghetti bolognese. (Raising other disturbing questions—such as, why would the White House want to silence forever the one guy with all the names, the most valuable intelligence asset in the world… unless of course that was the whole point of slaughtering him in his Abbottabad cell? Which leads one to wonder why the US wanted to make sure Bin Laden kept his secrets to himself, should one bother wondering.)

Hersh has pissed off some very powerful people and institutions with this story, and that means the inevitable media pushback to discredit his reporting is already underway, with the attacks on Hersh led by Vox Media’s Max Fisher, CNN’s Peter Bergen, and even some on the left like Nation Institute reporterMatthieu Aikins. Yesterday Slate joined the pile-on, running a wildly entertaining, hostile interview with Hersh.

Such attacks by fellow journalists on a Sy Hersh bombshell are nothing new—in fact, he used to relish them, and probably still does. He got the same hostile reaction from his media colleagues when he broke his biggest story of his career: The 1974 exposé of the CIA’s massive, illegal domestic spying program, MH-CHAOS, which targeted tens, maybe hundreds of thousands of Americans, mostly antiwar and leftwing dissidents.

Hersh is better known today for his My Lai massacre and Abu Ghraib exposés, but it was his MH-CHAOS scoop, which the New York Times called “the son of Watergate,” that was his most consequential and controversial—from this one sensational exposé the entire intelligence apparatus was nearly taken down. Hersh’s exposés directly led to the famous Church Committee hearings into intelligence abuses, the Rockefeller Commission, and the less famous but more radical Pike Committee hearings in the House, which I wrote about in Pando last year. These hearings not only blew open all sorts of CIA abuses, assassination programs, drug programs and coups, but also massive intelligence failures and boondoggles.

They also revealed to the public for the first time the NSA’s secret programs targeting Americans, including co-opting all the major US telecoms and cable telex companies— AT&T, ITT, Western Union and RCA—in a program “vacuuming” all electronic communications, as well as “Project Minaret,” in which the NSA wiretapped hundreds or perhaps tens of thousands (depending on the source) of antiwar and leftwing American dissidents. Those hearings led briefly to some real reforms and some half-assed reforms in the intelligence community during the Carter years, all of which were undone as soon as Reagan came to power. (I wrote about the history of Hersh’s MH-CHAOS exposé for NSFWCorp here and here.)

That is what effective journalism looks like. But if Hersh’s media peers at the time had their way, none of that would’ve happened. Rather than supporting Hersh, journalists across the spectrum, led by the Washington Post, did everything to discredit and undermine his reporting. “I was reviled,” is how Hersh later put it to UC Davis professor Kathryn Olmsted, author of the excellent “Challenging the Secret Government.”

It was mostly thanks to the CIA director’s own admission in January 1975 that Hersh’s reporting was correct that other journalists backed off, and joined in the adversarial feeding frenzy. Yes: the CIA saved Hersh’s biggest scoop from the lapdog press. Times were strange.

And it was the Washington Post that led the attacks on Hersh’s reporting. In early January 1975, the WaPo ran an editorial, “The CIA’s ‘Illegal Domestic Spying,’” attacking Hersh for relying on anonymous sources—this from the same paper that relied on the most famous anonymous source in history, Deep Throat. The WaPo editorial went on:

“While almost any CIA activity can be fitted under the heading of ‘spying,’ and while CIA activities undertaken on American soil can be called ‘domestic spying,’ it remains to be determined which of these activities has been conducted in ‘violation’ of the agency’s congressional charter or are ‘illegal.’”

The WaPo’s top intelligence reporter, Laurence Stern, took to the Columbia Journalism Review to attack Hersh in an article titled “Exposing the CIA (Again)”—alleging a “dearth of hard facts” in Hersh’s reporting, and a “remarkably febrile succession of follow-ups.” While in the Post, Stern alleged that it wasn’t the CIA that was keeping files on the 9,000 Americans that Hersh orginally reported, but rather the Justice Department—making it therefore legal. Pulitzer Prize winner Jack Anderson followed up in the WaPo confirming Stern’s false allegation, in a piece titled, “CIA’s Files Said to Support Denials”.

The two major news weeklies, Time and Newsweek, piled on Hersh’s reporting too. Newsweek, in a piece headlined “A New CIA furor,” quoted a number of anonymous intelligence sources to discredit and downplay the significance of Hersh’s MH-CHAOS scoop: “There’s something to Hersh’s charges, but a hell of a lot less than he makes of it.” Time’s article, “Supersnoop,” snarked:

“[T]here is a strong likelihood that Hersh’s CIA story is considerably exaggerated and that the Times overplayed it.”

Hersh might’ve been buried by his own press colleagues, who were only interested in discrediting his reporting, if not for CIA director William Colby’s testimony before the Senate in mid-January, 1975. Hersh himself reported it for the Times, which led:

“William E. Colby, Director of Central Intelligence, acknowledged at a Senate hearing today that his agency had infiltrated undercover agents into antiwar and dissident political groups inside the United States as part of a counterintelligence program that led to the accumulation of files on 10,000 American citizens.”

After the CIA chief’s confirmation of Hersh’s story, his media detractors had no choice but to grudgingly walk back their criticism. Quoting again from Kathryn Olmsted’s book, after Colby’s admission,

“The Washington Post reported that Colby’s disclosure had ‘confirmed major elements’ of Hersh’s stories, and Newsweek agreed that Colby’s testimony had substantiated ‘many basic elements of the original story if not all the adjectives.’”

Today we’re seeing some of the same grudging, qualified acceptance of Hersh’s Bin Laden bombshell from the establishment press.

Later in 1975, the great Bill Greider—who was then an editor at the WaPo—summed up the attitude of the press to Hersh’s revelations:

“the press especially tugs back and forth at itself, alternately pursuing the adrenal instincts unleashed by Watergate, the rabid distrust bred by a decade of out-front official lies, then abruptly playing the cozy lapdog.”

My how we’ve grown so much in the 40 years since.