On one hand, the government’s Department of Labor reported earlier today that in the past week just 265K people were laid off: the lowest number since early 2000. On the other, private data aggregator Challenger reported that in April, there were a whopping 61,582 job cuts, a 68% surge from March, and up 53% from a year ago. This was the highest monthly total since May 2012 and the highest April total since 2009!

Smoothing out the noise reveals that in the first 4 months of 2015, employers announced 201,796 planned job cuts, which marks a 25 percent increase from the 161,639 layoffs tracked in the first four months of 2014. This is the largest four-month total since 2010.

To say that something does not add up here between the public and private data releases is quite evident.

Recall what we said last month when we “welcomed” Texas to the recession with some 47,043 layoffs through March:

… when broken down by state, things get bad for Texas, very bad. As in recession bad, because with 47K total layoffs, or 10K more than all energy-related layoffs, in just this one state so far in 2015, it means that the energy sector weakness has moved beyond just the oil patch and has spread to the broader economy and related industries in the one state that until recently had the best jobs track record since Lehman.

Fast forward to today when we find that what we thought was bad for Texas with 47K layoff announcements in the highest-paid energy sector, just got far, far worse when in its monthly update earlier today, Challenger announced that just in the month of April another 22,760 jobs were lost in Texas, bringing the total to a whopping 69,803 layoff announcements, and forcing us to literally get a bigger chart so we can accommodate the Texas data. 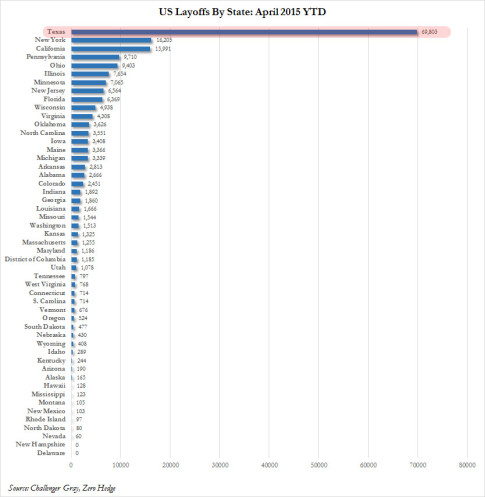 Challenger’s description of recent events is just as dire:

Driving the increased pace of job cutting in April and for the year is the dramatic decline in oil prices, which is forcing producers and suppliers to cut production. Of the 61,582 job cut announced last month, 20,675 or 34 percent were directly attributed to oil prices.

“Schlumberger, Baker Hughes and Halliburton have all announced multiple rounds of job cuts in recent months, including April. The largest job cut of the month came from Schlumberger, which announced that it will shed 11,000 workers, in addition to the 9,000 laid off in January,” said John A. Challenger, chief executive officer of Challenger, Gray & Christmas.

“The jobs that are most vulnerable are those in the field – engineers, oil rig operators, drill operators, refinery operators, etc. Managers and executives in the corporate offices are more secure, but the drop in oil prices is leading to increased merger activity, which could put more executives at risk of job loss,” said Challenger.

Most of the oil-related layoffs have occurred in the energy sector, which is the top job-cutting industry to date, with 57,556 planned cuts. That is more than double the second-ranked retail sector, which has announced 26,096 job cuts this year.

The pace of retail sector job cuts is slightly higher than a year ago, when these employers announced 25,224 job cuts through the first four months.

“Low oil prices should be helping retailers. However, the extra money in Americans’ wallets do not appear to be making it into the nation’s cash registers. Retail sales have been lackluster, at best. Furthermore, consumer products giant Procter & Gamble announced in April that it would reduce its headcount by as many as 6,000 workers over the next two years, following a poor earnings report,” noted Challenger.

Truly confusing… if you are a Keynesian economist.  As for the punchline:

“We could be witnessing the after-effect of the severe and protracted recession. Much like the generation that lived through the Great Depression, those who scraped by during the recession are being extra careful with their money. Another factor is that not everyone’s boat is rising with the tide. Many Americans are still struggling to find work and those that do are not earning as much they once did,” he said.

Actually Mr. Challenger, you are wrong: what we are witnessing is not the after-effect of the “severe and protracted recession” – we are witnessing the continuation of the Second Great Depression which never went away, and whose effect has been masked – so far – thanks to $22 trillion in central bank assets, which alone have delayed, not avoided, a historic market meltdown, and as Deutsche Bank’s Jim Reid said earlier today, “capitalism has been propped up every time it’s about to go through one of the cyclical creative destruction phases.”

For tens of thousands of formerly very well paid workers in Texas, the props have finally come off. They can now hone their BTFD and BTFATH “trading” skill though: the only skill they need in the new centrally-planned paranormal.

Next up: the mean reversion.