– Gulf Stream Is Slowing Down Faster Than Ever – Greenland Anomaly 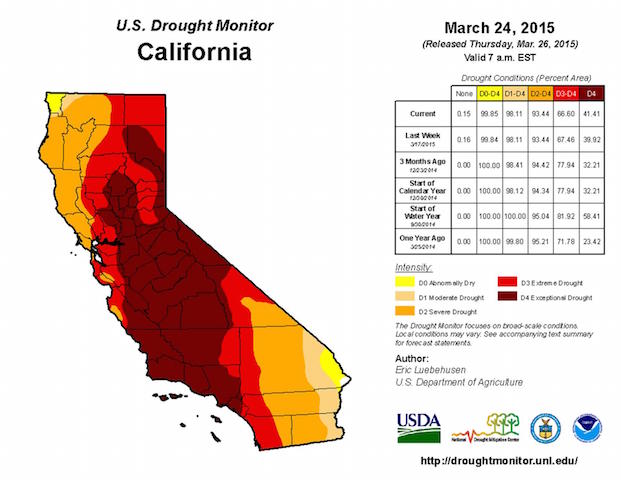 – California Adopts “Unprecedented” Restrictions On Water Use As Drought Worsens (ZeroHedge, May 5, 2015):

Early last month we warned that California’s drought was approaching historic proportions and that if climatologists were to be believed, the country may see a repeat of The Dirty Thirties as experts cite “Dust Bowl” conditions. Governor Jerry Brown has called for statewide water restrictions aimed at reducing consumption by 25%.

Now, the conservation calls are getting much louder as the state’s water regulators have approved “unprecedented” measures aimed at curtailing the crisis.

California water regulators adopted sweeping, unprecedented restrictions Tuesday on how people, governments and businesses can use water amid the state’s ongoing drought, hoping to push reluctant residents to deeper conservation.

The State Water Resources Control Board approved rules that force cities to limit watering on public property, encourage homeowners to let their lawns die and impose mandatory water-savings targets for the hundreds of local agencies and cities that supply water to California customers.

Gov. Jerry Brown sought the more stringent regulations, arguing that voluntary conservation efforts have so far not yielded the water savings needed amid a four-year drought. He ordered water agencies to cut urban water use by 25 percent from levels in 2013, the year before he declared a drought emergency…

Despite the dire warnings, it’s also still not clear that Californians have grasped the seriousness of the drought or the need for conservation. Data released by the board

Tuesday showed that Californians conserved little water in March, and local officials were not aggressive in cracking down on waste.

A survey of local water departments showed water use fell less than 4 percent in March compared with the same month in 2013. Overall savings have been only about 9 percent since last summer.

Under the new rules, each city is ordered to cut water use by as much as 36 percent compared with 2013.

And more color from The LA Times which reports that California will begin cracking down on “wasters” via the imposition of stiff fines as millions of trees die out in National Forests, raising the risk of wildfires :

“Right now we’re scared. Right now we’re in the denial stage. We have to get into acceptance, and we have a relatively short period of time to do it.”

Others were more skeptical, citing new data showing that California’s hundreds of urban water suppliers assessed only 682 penalties to water wasters in the last several months after receiving more than 10,000 complaints.

The enforcement data demonstrate the “need to make enforcement a true deterrent to water wasting,” said Mark Gold of UCLA’s Institute of the Environment and Sustainability. “People don’t park in posted street sweeping parking spaces three weeks in a row. The vast majority of people in California are not looking at this as a dire situation, yet.”

Years of extremely dry conditions are taking a heavy toll on forest lands across California and heightening the fire risk as summer approaches.

“The situation is incendiary,” William Patzert, a climatologist for the Jet Propulsion Laboratory, told The Times recently. “The national forest is stressed out”…

A new study by the U.S. Forest Service tried to assess the scope of the problem. Researchers estimated that the drought has killed off at least 12.5 million trees in California’s national forests during the drought.

The scientists expect the die-off to continue. “It is almost certain that millions more trees will die over the course of the upcoming summer as the drought situation continues and becomes ever more long term,” said biologist Jeffrey Moore, acting regional aerial survey program manager for the U.S. Forest Service. 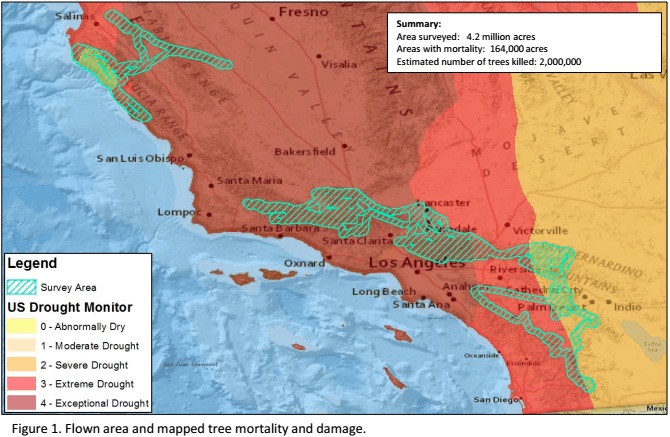 Of course, cutting back will come at a steep cost for utility companies who will promptly attempt to replace an estimated $1 billion in lost revenue by raising prices for consumers. Between rising utility costs and fines of up to $10,000 for egregious violations of the state’s conservation efforts, hydration just got a lot more expensive in California — unless you’re a MotherFracker, in which case none of this applies. 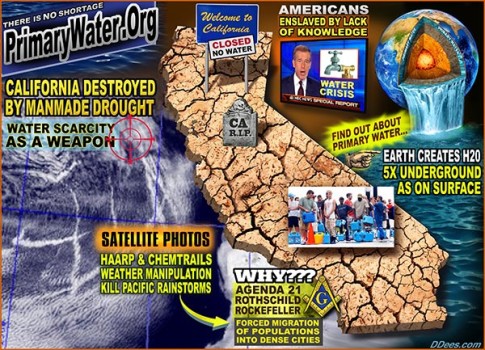