“Greece is so far off course on its $172bn bailout programme that it faces losing vital International Monetary Fund support unless European lenders write off significant amounts of its sovereign debt, the fund has warned Athens’ eurozone creditors,” FT reports, indicating that the organization may force the ECB and implicitly the German taxpayer to take the hit if Greece wants to receive the last tranche of aid under its existing program

– IMF Splinters From Rest Of Troika, Threatens To Cut Off Greek Funding (ZeroHedge, May 4, 2015):

At this point it’s become fairly obvious to even the most casual observer that Greece is headed for some manner of default. The only real question is who gets shorted and when, as well as a relatively new question: which debt will Greece will default on first (just because it has so many choices). 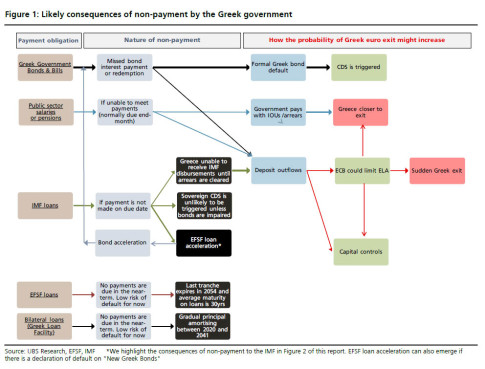 After a decree to sweep excess cash from local government coffers to the central bank didn’t go entirely as planned, Athens was forced to delay pension payments by 8 hours last Tuesday, prompting retirees to storm a pension fund board meeting, and at least one official recently claimed that even if a deal had been struck yesterday, there simply was no way — logistically speaking — that Greece could possibly make its May 12 payment of €780 million to the IMF.

Now, FT is reporting that the IMF may refuse to disburse its part of the remaining €7.2 billion Athens would theoretically receive if negotiations produced a breakthrough unless the country’s European creditors agree to write-off a portion of their Greek debt. Here’s more:

Greece is so far off course on its $172bn bailout programme that it faces losing vital International Monetary Fund support unless European lenders write off significant amounts of its sovereign debt, the fund has warned Athens’ eurozone creditors.

The warning, delivered to eurozone finance ministers by Poul Thomsen, head of the IMF’s European department, raises the prospect that it may hold back its portion of a €7.2bn tranche of bailout aid that Greece is desperately attempting to secure to avoid bankruptcy.

Eurozone creditors, who hold the vast bulk of Greek debt, are adamantly opposed to debt relief. But IMF support is crucial both for its funds and to sustain political backing for the Greece bailout, particularly in Germany.

According to two officials present at a contentious meeting of eurozone finance ministers in Riga last month, Mr Thomsen said initial data the IMF had received from

Greek authorities showed Athens was on track to run a primary budget deficit of as much as 1.5 per cent of gross domestic product this year.

Under existing bailout targets, Athens was supposed to run a primary surplus — government receipts net of spending, excluding interest payments on sovereign debt — of 3 per cent of GDP in 2015.

With the large surplus now turning into a sizeable deficit, Greece’s debt levels would begin to spike again.

FT also notes that this has happened before and although European lenders had agreed to consider write-offs in exchange for the IMF funneling cash to Athens, the loans were never actually reduced.

Essentially the IMF is reluctant to give Greece any more money while the country is still running a deficit — that is, they’re not terribly excited about throwing cash into a blackhole. Instead, they may demand that Athens’ debt-to-GDP ratio be reduced the old fashioned way: by simply forcing the ECB and the German taxpayer to write down their portion of the existing debt. This amounts to the most absurd kind of can-kicking one can possibly imagine, as without reforms, Greece will quickly replace the old debt that’s written off with new debt which will then have to be written off at some future date when Grexit again rears its ugly head and so on and so forth.

It also strongly suggests that the IMF is threatening to not pay… itself: after all the bulk of upcoming Greek interest and principal payments are to the IMF. Which is why the “patient” Greeks are expected to smile and nod knowingly at this latest hollow IMF threat, in which it is now unclear if Lagarde is the Troika’s good cop (demands a debt haircut) or bad cop (refuses to pay Greece any more).

Meanwhile, Kathimerini notes that the ECB is considering several options for new haircuts on collateral pledged by the insolvent Greek banking sector for ELA:

Greece is hoping that it will find enough common ground with its lenders to trigger an emergency Eurogroup before May 6, when the European Central Bank’s government board is due to meet next to decide on the provision of liquidity to Greek banks.

Wednesday is seen as a key day by the Greek government not just because it wants to alleviate its cash shortage problems as soon as possible but also because ECB officials could opt to increase the haircut that the central bank applies to the collateral offered by Greek lenders in exchange for liquidity.

Kathimerini understands that the ECB is working on three scenarios: Haircuts of 44 percent, 65 percent and 80 percent. The current discount applied to Greek banks’ collateral is 23 percent. Should the ECB choose the more drastic scenarios, local lenders would find it increasingly difficult to come up with the amount of collateral needed in order to maintain the flow of liquidity from Frankfurt.

Since it appears the IMF will not shy away from throwing its weight around as it sees fit when the going gets tough, we wonder whether the organization already has other political parties (primarily in Spain and Italy) that it has added to its list of “non grata” political organizations like Syriza, whose election will result in the prompt pulling of funds and demands for a sovereign default, if mostly on the backs of Greman taxpayers and not so much the IMF itself?

1 thought on “IMF Splinters From Rest Of Troika, Threatens To Cut Off Greek Funding”