“… the studies found the cost of a ‘Brexit’ would outweigh the benefits.”

And better not take a look at what happened in Iceland and Greenland: 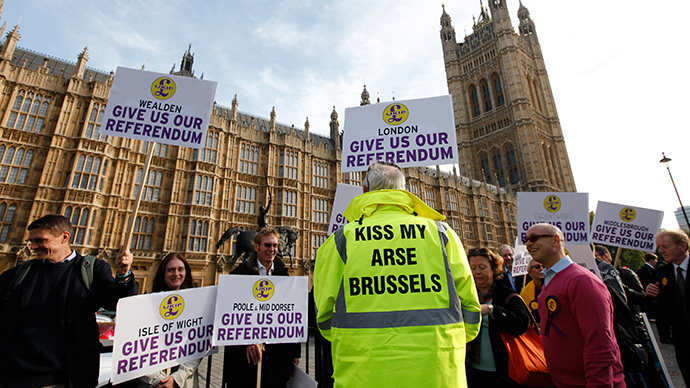 A British exit from the European Union could cost the UK billions of pounds, a report published by two German institutes predicts.

The study by Bertelsmann Stiftung and Ifo Institute calculates if the UK leaves the EU the country could lose 14 percent of its GDP – equivalent to £215 billion.

Germany and other EU member states would also lose out financially, although not as much as Britain.

Even if Britain was successful in negotiating a trade agreement with the EU, the studies found the cost of a ‘Brexit’ would outweigh the benefits.

The report analyzed three scenarios and looked at the effect an EU exit would have on Britain in 2030, the year it believes negative effects will begin to materialize.

In the report’s most positive case, Britain would negotiate a trade deal with the EU similar to Switzerland’s.

Under such a deal, the UK’s GDP per head would be £157 lower than if Britain stayed in the EU.

In its most negative scenario, Britain would lose all trade privileges arising from EU membership and its free trade agreements.

Losses could run up to £3,471 per head in such a case, which factors in trade isolation and the dent to innovation in the UK and London’s position as a financial center.

“A Brexit is a losing game for everyone in Europe from an economic perspective alone – particularly for the UK,” said Aart De Geus, chairman and chief executive of the Bertelsmann Stiftung.

“But aside from the economic consequences, it would be an especially bitter setback for European integration as well as Europe’s role in the world. Setting the course for a Brexit in the House of Commons elections would weaken the EU.”

Europe’s economic powerhouse Germany would also suffer in the event of a British exit.