If you didn’t know any better you might think “Grimbo” was a new Sesame Street character. Far from being the name of something that brings smiles to the faces of young children however, it’s actually the latest one-word take on the likely outcome of Greece’s protracted, painful negotiations with creditors, which will continue tomorrow in Riga where progress is, according to pretty much everyone that will be involved, unlikely. The new term follows in the footsteps of the classic (but now tired) “Grexit” and its underrated predecessor “Graccident,” and refers to two of the four outcomes Citi imagines are possible in the unfolding Greek drama. Here, via Citi, are the scenarios that would constitute Grimbo:

A new programme agreed, but only after capital controls were imposed and/or a Greek government default

In this scenario, current negotiations would fail to produce an agreement until a major event (or shock) occurs. Such an event could be that i) the ECB limits access for Greek banks to ELA (as it either runs out of patience about the lack of negotiations, or Greek banks face a large increase in funding outflows), ii) PM Tsipras calls a referendum (on the new programme or Eurozone membership) or snap elections, or iii) the Greek government misses a payment/defaults. In these cases, the shock could provide an extra push on both sides to conclude the negotiations and encourage leaders to take on potential domestic detractors and opponents to push through a deal. The timing of such a shock is uncertain and hard to predict. In theory a run on banks could trigger capital controls tomorrow. Equally, the government may not run out of money or the ECB out of patience until the summer…

No new programme, government default, capital controls and yet no Grexit.

In our view, it is by no means certain that the two sides can agree on a new programme in the coming months, even with capital controls in place, given the wide gap between the negotiating positions, the mutual lack of trust and the undercurrent of personal animosity. Without a new agreement, a Greek government default at some point is very likely, in our view, due to the shortage of other funding options. The lack of an agreement would also at some point be associated with capital controls and binding limits on ELA access. Compared to the previous scenario, the capital controls (a mix of bank holidays, deposit withdrawal restrictions, restrictions on external transactions) are likely to be more extensive and longer-lived…

The lack of liquidity for the sovereign would induce it to issue more IOUs (scrip) in lieu of payments in euro, increasingly for salaries and pensions in addition to payments to suppliers. Such IOUs are likely to gradually be traded and thereby develop into a parallel currency.

This scenario may well be triggered by a negative outcome to a referendum on a proposed bailout agreement without necessarily providing a mandate to exit the Eurozone. Over time, the stressed liquidity situation, and notably deposit withdrawal restrictions for banks, would significantly increase pressure on the Greek government, making fresh elections likely.

Those could produce a mandate for a new bailout agreement with the Eurozone or pave the way for an eventual Grexit, but this could still leave Greece in limbo for an extended period of time – Such a ‘Grimbo’ scenario can, but need not end in, Grexit. Grexit is not a well-defined legal or Treaty base step.

Meanwhile, the doublespeak continues from all sides and it’s starting to appear as though no one really has a good read on what’s going on even as the situation in Greece has grown increasingly desperate and now includes the seizure of local government deposits by the central bank (which claims it needs the cash to pay salaries and pensions) and rumors that Greece may need to tap Gazprom for an advance on the Turkish Stream pipeline project in order to stay afloat.

The good (via Bloomberg)…

“Greece has its place within the euro. And it’s what the Greek people want,” Moscovici says at conference in Brussels

Provided “Brussels Group” of officials keeps pace of progress, an agreement for bailout disbursement is possible by end-April

Creditors haven’t discussed any sort of plan B with Greek govt, including default, arrears on IMF payments, or exit from euro area

Greece wants a solution, not a rupture

“The Greek government has got to show some backbone in its reform efforts,” Moscovici says

Need to “make Greece more attractive to investors. Investors have to come back to Greece. What Greece really needs is growth and employment creation,” Moscovici says

European Commission Vice President Valdis Dombrovskis says “we do not expect any major breakthroughs” on Greece at Riga meeting starting Friday “because technical negotiations are ongoing.”

“These technical negotiations will need to continue after tomorrow because progress so far is not sufficient. There is still a lot of work to be done”

Not easy to imagine what new facts Greece will present

There’s also some hope that sideline talks between Tsipras and Merkel at today’s EU Summit will bear some fruit. Here’s kathimerini:

Prime Minister Alexis Tsipras is to meet with German Chancellor Angela Merkel Thursday in Brussels in a bid to secure a statement of political support from Berlin amid tough negotiations with creditors and dwindling finances.

The meeting, which is to take place on the sidelines of a European Union leaders’ emergency meeting on immigration, was announced in a brief statement from Tsipras’s office. The move came amid reports that negotiations taking place in Paris between Greek government officials and representatives of the creditors had made some small progress but remained far from securing a deal that could unlock crucial rescue funding.

Against this backdrop the market is still struggling to determine the extent of the contagion risk to the EU periphery should Grexit or Grimbo become reality. While we contend that redenomination risk will ultimately be the deciding factor when it comes to whether events in Greece cause crises in the likes of Spain, Italy, or Portugal, focus has shifted to sovereign spreads over the past week despite the fact that ECB asset purchases make it difficult to determine exactly what’s being priced in. Here’s Citi with a bit of color on contagion via EGBs:

As shown in Figure 1, (severe) corrections in Greece to higher yields have also tended to coincide with periphery sell-offs within the general bullish trend. We would also note that although 10yr Portugal, Spain and Italy are 10bp-30bp wider over April, contagion remains relatively limited and spreads remain near historic tights when considering a longer-term context (Figure 2).

We think the level of near-term event risk and the pick-up in volatility in Greece is such that further episodes of periphery spread weakness cannot be ruled out. Although spreads are likely ultimately to end the year tighter largely thanks to QE, near-term headline risk is likely to weigh on market sentiment and with it, the EMU spread environment. This may dominate otherwise supportive technicals such as the net cash flows.

Finally, here’s a table from Bloomberg which outlines the list of reforms and where negotiations currently stand (for our part, we think this is a bit optimistic): 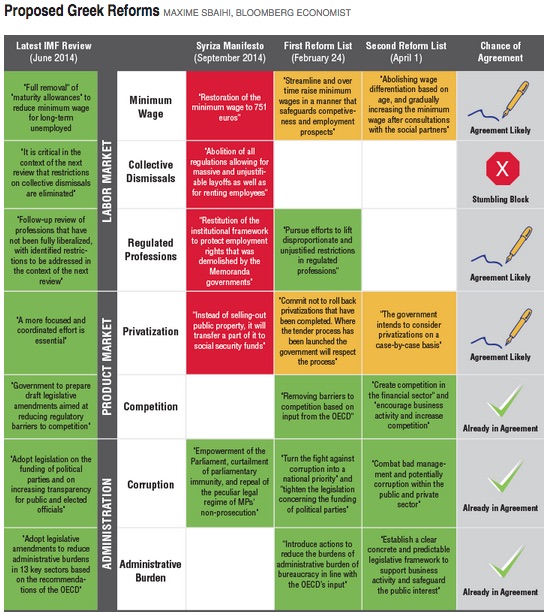