Back in January we asked the following: “who will be the first to offer a negative rate mortgage?” Soon thereafter we discovered that in fact, this NIRP-inspired aberration already existed in Denmark where Nordea Credit was offering to pay borrowers to purchase a house prompting us to make the following assessment:

And just like that, first in Denmark, and soon everywhere else in Europe, a situation has now emerged where savers who pay the bank to hold their cash courtesy of negative deposit rates, are directly funding the negative interest rate paid to those who wish to take out debt. In fact, the more debt the greater the saver-subsidized windfall.

That would turn out to prove rather prescient because as WSJ reports, this bizarre characteristic of the new paranormal is spreading throughout Europe on the back of Mario Draghi’s trillion-euro adventure in debt monetization land.

Tumbling interest rates in Europe have put some banks in an inconceivable position: owing money on loans to borrowers.

At least one Spanish bank, Bankinter SA, the country’s seventh-largest lender by market value, has been paying some customers interest on mortgages by deducting that amount from the principal the borrower owes.

The problem is just one of many challenges caused by interest rates falling below zero, known as a negative interest rate. All over Europe, banks are being compelled to rebuild computer programs, update legal documents and redo spreadsheets to account for negative rates.

Banks set interest rates on many loans as a small percentage above or below a benchmark such as Euribor. As rates have declined, sometimes to below zero, some banks have faced the paradox of paying interest to those who have borrowed money from them.

Lenders, hoping to avoid the expense of having to pay borrowers, are turning to central banks for guidance. But what they are hearing is less than comforting.

Portugal’s central bank recently ruled that banks would have to pay interest on existing loans if Euribor plus any additional spread falls below zero. The central bank, however, said lenders are free to take “precautionary measures” in future contracts. More than 90% of the 2.3 million mortgages outstanding in Portugal have variable rates linked to Euribor.

In Spain, a spokesman for the central bank said it is studying the issue.

The vast majority of Spanish home mortgages have rates that rise and fall tied to 12-month Euribor, said Irene Peña, an economist with Spain’s mortgage association. That rate stands at 0.187%.

Bankers in Italy said they are awaiting guidance from their local banking association, because loan contracts don’t include any clause on what happens if benchmark rates go below zero. About half of the mortgages outstanding in Italy have variable rates, most of them linked to Euribor, according to mortgage broker Mutuionline. 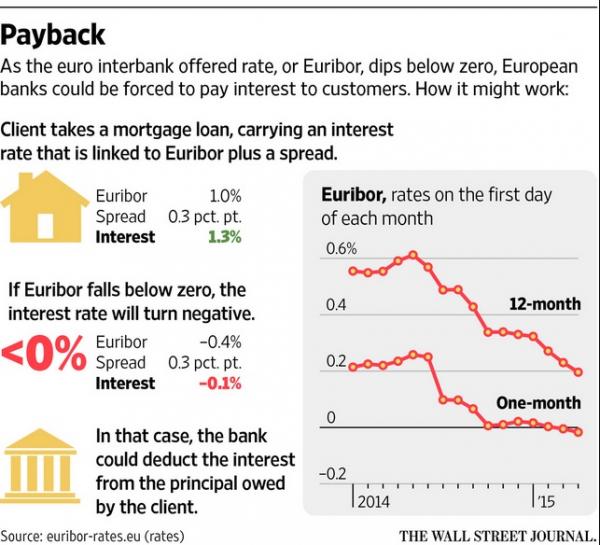 If you think this sounds too ridiculous to be true (or at least too ridiculous to become a fixture of the European housing market), consider the following from Citi who thinks negative three month fixings are in the cards even if the ECB doesn’t move the deposit rate further into negative territory:

The question about negative Euribor fixings is more interesting. We do not think it is impossible to have negative 3m fixings (currently +0.018%) even without further adjustments of the depo rate.

Again, looking back at fixing behavior during periods of high excess liquidity, we note how the tightest depo/3m spread fixed at +18bp in Dec-12. Both the refi and the depo rate were unchanged during that period, while excess liquidity hovered above EUR 600bn on average. In the current context, i.e. depo @-20bp, we should not understate the chances of 3m Euribors fixings back to these levels on further ECB balance sheet expansion. In such a scenario, we should expect 3m to fix structurally around -2bp.

Now consider what happens if some euro NCBs cannot meet their monthly purchase targets under PSPP and raising the issue limit to 50% and/or an expansion of eligible SSAs proves insufficient to make up the difference. In that scenario, the ECB may have no choice but to take the depo rate further into negative territory (as JPM predicted last month) and at that point, it will be a very good time to buy a home in Europe.

Of course, we would also note that having the interest the bank owes you on your mortgage deducted from the principal still doesn’t beat the program that now exists in Florida and New Jersey wherein you get your home from free simply by refusing to pay for it.

1 thought on “Banks Across Europe Pay Borrowers To Buy Homes”