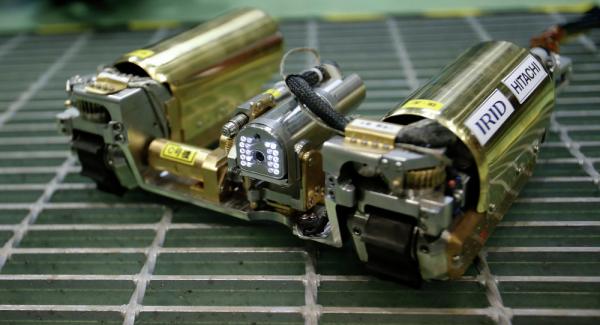 We are sure this is nothing to worry about… and Japanese officials will re-iterate that everything is on track but when a snake-like robot sent to inspect a reactor containment vessel at the Fukushima Daiichi nuclear power plant dies three hours into the operation, one might wonder just how “contained” the radiation situations really is.

The crippled reactors are inaccessible to humans because of deadly levels of radiation, so using the two-foot-long robot was the first chance officials were able to examine the damage caused by highly radioactive nuclear-fuel debris.

The robot has been developed by the International Research Institute for Nuclear Decommissioning (IRID) and Hitachi-GE Nuclear Energy to investigate hard-to-access areas of the plant. It consists of three segments: the robot’s main body and two compact crawlers. The robot can assume a long, straight shape for passing through narrow spaces, such as pipes. Alternatively, it can rotate its crawlers by 90 degrees in relation to its central body to assume a U-shape, with the crawlers providing better stability when travelling over flat surfaces.

“We believe this will lead us to figuring out how to decommission the reactor,” Ryo Shimizu, spokesman for plant operator Tokyo Electric Power Company (TEPCO), told NBC News.

With the core still ‘missing’, Sputnik News reports that,

The robot sent to inspect a reactor’ containment vessel at the Fukushima Daiichi nuclear power plant stopped responding three hours into the operation.

TEPCO hoped to take a look inside the vessel containing one of the three reactors, which underwent a meltdown in the 2011 nuclear disaster.

A group of approximately 40 workers sent the remotely-controlled device, allegedly capable of withstanding high levels of radiation, into the vessel at 11:20 a.m. The robot stopped functioning after covering two thirds of the route at approximately 2:10 p.m., according to the Tokyo Electric Power Co.

The company did not say whether it would send another robot into the vessel on Monday, as previously planned. TEPCO’s ultimate goal is to use the robot to inspect the melted fuel inside the vessel.

So there is still no sign of the corium…