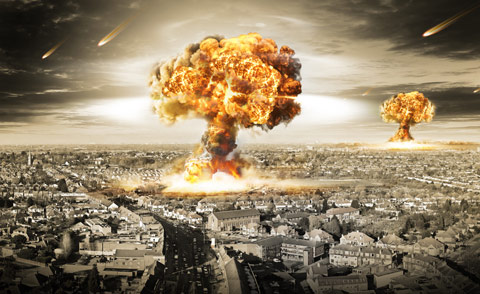 – Video: How the Next Economic Collapse Unfolds: ‘This Is How They’ll Press The Reset Button’ (SHFTplan, April 7, 2015):

The data keeps pouring in. The U.S. economy is in trouble. All of the official statistics like job growth and economic recovery are based on lies and fabrications.

As Christopher Green of Alternative Media Television explains in his latest video commentary, those lies will eventually catch up with us and when they do the consequences will be impossible for most people to imagine.

It’s exactly why we saw the Swiss bank, for example, with a counter-move that shot the Franc up 20% overnight when they said they were going to hold to their original policy. You see, the Fed is losing credibility and that is the point.

And when the next collapse hits and the Fed is backed into a corner and investors wonder how that was able to happen while the Fed was still stimulating, that’s when the real shit is going to hit the fan.

And it all ends in war… and that’s why I think the geo-politically the conflicts have already started… that’s how the U.S. federal government and the military industrial complex will press that reset button.

Green’s reference to the Swiss Franc’s overnight counter-move is a perfect example of how quickly the status quo can change. We’ve written before about the Waterfall Effect, wherein all systems could potentially collapse overnight once the right event is triggered. Several years ago contrarian investor Doug Casey explained that when it finally does happen it will be so fast that most people won’t know it even happened until it’s too late.

Yes, “It can happen here,” and it’s going to. Maybe not this year, maybe not for several, but when the real crash gets underway, it’ll be unstoppable, and it will destroy the status quo with a speed that will leave most people still waking up to the danger after the harm has already been done.

But the plain truth is that we’ve already gone beyond the point of no return. There is simply no way the U.S. government can pay all its obligations without defaulting or destroying the dollar

Though we can’t pinpoint the catalyst, the consequences should be clear. The coming economic collapse will be unlike anything we’ve ever experienced in our lifetimes, but that won’t be the worst of it.

Once the people are jobless, hungry and ready to rebel against their governments is when the real fireworks will begin – literally. Though war may not be imminent at this moment, make no mistake, the Russians and Chinese are massively expanding their militaries in anticipation of the day the reset button is pressed.

The best course of action is to prepare for the collapse of life as we know it today and then for the aftermath, which may well be the most destructive war in history. Doug Casey said it best:

“When the food riots start in New York, LA, London, Paris, etc., I want to be good and far away.”

War is coming. That is how human civilization always deals with economic collapse.

This time will be no different.

1 thought on “Video: How the Next Economic Collapse Unfolds: ‘This Is How They’ll Press The Reset Button’”