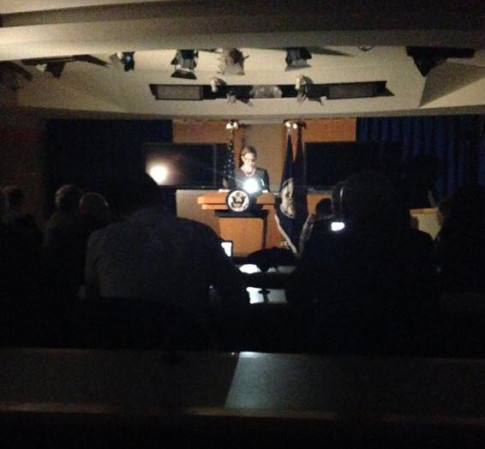 Spokesman says WH on backup generators that kicked in after power outage.

D.C. Homeland security officials believe an explosion at a SMECO power facility in southern Maryland caused the surge into D.C.

The utility firm Pepco is currently investigating a Washington-wide black-out that has plunged The White House, State Department, The US Capitol, D.C. Metro, and even Oprah’s TV Stage into darkness…Ironically, the outage occurred minutes after Rand Paul commented that “the time has come to take away the power from Washington D.C…”

A spokesperson for Pepco, the Washington, D.C.-area provider electricity utility, told Reuters that it experienced scattered outages Tuesday but that they had happened for “unknown reasons.”

Has anyone seen Kim Jong-Un today?

The U.S. State Department lost electrical power Tuesday during its daily press briefing, and power also was briefly lost in areas of the White House and the Capitol.

Hallways were dark in the State Department, lit only by light filtering in from the windows. Spokeswoman Marie Harf completed her briefing in the dark, reading from her briefing binder by the light of her iPhone as reporters took notes with lighting from their mobile phones.

Power briefly flickered off at the White House Tuesday afternoon, affecting the media workspace and at least some staff areas. Aides would not say if the White House was being powered by backup generators, though they planned to issue a statement later. Guests entering the White House were also temporarily delayed because Secret Service screening equipment was briefly knocked offline by the outage.

Multiple buildings in the U.S. Capitol complex were experiencing intermittent power outages, Capitol Police spokesman Shennell Antrobus said in an e-mail. The Capitol Police and architect of the Capitol were investigating the cause of the outages, he said.