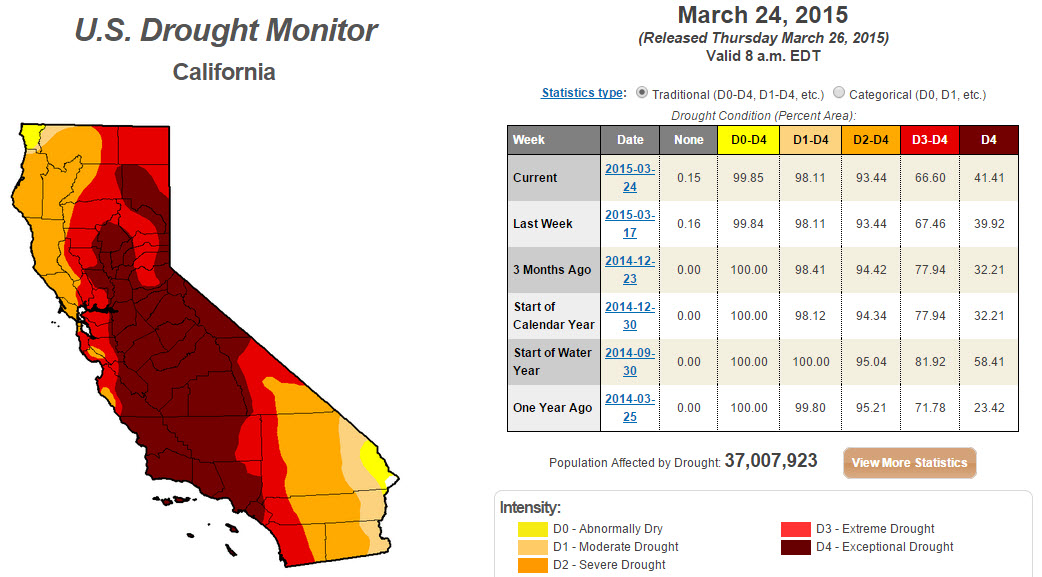 For the first time in history, the California government has declared mandatory water restrictions designed to save the state from a water collapse. (But it still won’t work, see below…)

An order went out yesterday from Governor Brown’s office, requiring water agencies to “…implement new pricing models that discourage excessive water use,” reports the LA Times. In other words, your water consumption costs are about to get even higher if you live in California.

The directive aims to reduce water consumption by 25% across the state — an aggressive restriction that clearly qualifies as an emergency reduction goal.

Also included in the directive is:

• A ban on non-drip irrigation systems for all new homes.

• A requirement for golf courses and cemeteries to “reduce water consumption.” (And yet, the very idea of green golf courses in the middle of a California desert is insane to begin with…)

• Force farmers to report more details on their water usage so that the state government can figure out where all the water is going (and where to restrict it even further).

• Outlawing the watering of grass on public street medians.

• Discussions are also under way to throw “water wasters” in jail for up to 30 days, according to another LA Times article. The most likely source of intel for incarcerating water wasters will be neighborhood snitches who monitor water usage of nearby homes and call the authorities if they see too much water being used.

Will California soon fill its prisons with “water criminals?” If a cop drives by a yard where two people are standing around, and one of them is smoking a joint while the other is watering his yard, guess which one will be arrested?

Much of Southern California is a desert. It just doesn’t have enough water to support the California lifestyle that has become far too familiar among those who live in the region — people who almost universally have no real clue how to survive or thrive in a desert even though they quite literally live in one.

So how do they survive? They live in artificial constructs called “cities” which depend entirely on external inputs in the form of water, food and electricity. Run out of any of those three, and cities like Los Angeles become nearly uninhabitable by all but the most hardened desert survivalists.

But the reality that they live in an artificial construct which will inevitably revert to a desert has never really occurred to most Californians. That’s why so many remain in a state of shock and denial over the water crisis they are now facing. The scientific data on rainfall and snowpack, however, tell a very different story.

“The water outlook in drought-racked California just got a lot worse: Snowpack levels across the entire Sierra Nevada are now the lowest in recorded history — just 6 percent of the long-term average,” reports NPR.

“[T]here will be virtually no runoff this spring or summer when the rain stops and temperatures rise,” says California state officials via the LA Times. Department of Water Resources spokesperson Doug Carlson characterized the situation as “dismal.”

That’s why California is headed for an outright water collapse. Via the LA Times:

“It does leave questions about where the water will come from,” Carlson said. “Will there be enough of it? It will probably have to come from groundwater again … and that brings in a whole other set of problems and complications since the groundwater seems to be over-tapped…

Groundwater is not a plan… it’s a delusion

Groundwater? This is California’s solution? There’s a two-year wait for drilling a new well, and the cost is half a million dollars, reports NPR, which adds:

Groundwater reserves are getting lower and lower as farmers and towns drill deeper and deeper, sucking out more water than there is coming in. It’s gotten so bad in the San Joaquin Valley that the ground is actually sinking. Last summer it sank a half-inch each month.

Groundwater is, of course, fossil water that takes hundreds (or thousands) of years to be replenished. Using it up over the span of just a few decades leads to the certainty of a water collapse. Unfortunately, California’s agricultural activities — which produce one-third of America’s fresh produce — are now based predominantly on groundwater for irrigation.

A NASA scientist named Jay Famiglietti recently warned that California’s water reservoirs have just one year remaining before a catastrophic collapse. In his own words, as published in the LA Times:

…the state has only about one year of water supply left in its reservoirs, and our strategic backup supply, groundwater, is rapidly disappearing. California has no contingency plan for a persistent drought… [groundwater] pumping rates are excessive and unsustainable … Wells are running dry. In some areas of the Central Valley, the land is sinking by one foot or more per year.

Famiglietti was, of course, heavily attacked for stating this, because the one thing that most Californians absolutely don’t want to hear about right now is THE TRUTH. And as we’ve all learned from watching the mainstream media’s deceptions over the years, it’s far easier for people to believe a lie than to believe the truth.

California’s “water fairy tale” has about the same factual reality as Disneyland’s Small World ride. Sure, if you believe California’s water will never run out, then you also believe those animatronic pirates are real people who just happen to love sitting around all day watching tourists float by on little boats.

So the lie continues. California will be just fine, we’re told. Water will be magically wrung from stones. Or maybe somebody will invent cheap fusion energy devices that can turn seawater into fresh water for pennies a gallon. Or heck, maybe Obama himself will simply issue an executive order demanding that rain fall from the sky according to the dictates of the Commander in Chief.

We can all engage in wishful thinking all day long, but at the end of the day:

• Most of Southern California is still a desert.

• Green golf courses should not exist in a desert.

• California’s water consumption is no more sustainable than California’s pie-in-the-sky state-run pension plans which are also headed for financial collapse.

• The California water-consumption lifestyle is ridiculously unsustainable. Nobody really cares, though, until they turn on the tap and nothing comes out.

• The Southern half of the state can really only support about 10% of its current human population in a sustainable way. That means 90% have to go somewhere else.

• Within just a few years, we will begin to see a mass migration out of California which will be described in the media as a “wave of climate change refugees.” But the climate didn’t cause this — human lack of foresight did.

• The water supply will eventually collapse because no one has any real interest in sacrificing their quality of life right now in order to protect a resource for future generations.

In other words, today’s California voters are generationally selfish because they’ve collectively decided to use up all the water TODAY, leaving no water for future generations TOMORROW. Gee, does that sound familiar, anyone? (National debt, soil erosion, fossil fuels, deforestation…)

And the reason we know Californians are totally asleep at the wheel on all this is because we haven’t yet seen a home sales selling spree panic. It’s coming, though. One day when the water is mostly gone, there will be so many homes for sale on the market that entire neighborhoods will be abandoned, and people will just walk away from what were once million-dollar mansions.

Mark my words. That day is coming, and when it arrives, you can bet the cognitively-challenged mainstream media will run a headline that reads, “WATER COLLAPSE: NO ONE SAW THIS COMING!”