Earlier today, when looking at the latest Factory Order data we saw that based on historical patterns if only in US manufacturing (if not in the recent seasonally-adjusted “hiring” of waiters and bartenders) the US is already in a recession. Ironically, this came out on the day in which the BLS presenting some more amusing “data” suggesting that only 268K workers filed initial claims in the past week, one of the lowest numbers of the second great depression.

Which is great for political propaganda purposes, however, for an accurate perspective we decided to look at a provider of job data that is actually representative of what happens in the real world not some goalseeked Arima-X-12 spreadsheet.

Here is what Challenger Gray found when looking at the latest monthly data:

Of the 140,214 job cuts announced in the first quarter, 47,610 were directly attributed to falling oil prices.

“Without these oil related cuts, we could have been looking one of lowest quarters for job-cutting since the mid-90s when three-month tallies totaled fewer than 100,000. However, the drop in the price of oil has taken a significant toll on oil field services, energy providers, pipelines, and related manufacturing this year,” said John Challenger, chief executive officer of Challenger, Gray & Christmas.

True, if we exclude all the negative data, all we are left with is good data. Continuing:

First quarter job cuts were dominated by the energy sector, where employers announced 37,811 job cuts in the first three months of 2015. The three-month total is up a whopping 3,900 percent compared to a year ago, when fewer than 1,000 energy cuts were reported.

“Oil companies are not the only energy-related firms who are getting hit this year. Coal mine closings in West Virginia and elsewhere around the country are also costing jobs,” noted Challenger.

Let’s ignore coal mines for now and focus only on energy.

What we find is that while Challenger has found “only” 37.8K energy-related layoffs in the first quarter, when broken down by state, things get bad for Texas, very bad. As in recession bad, because with 47K total layoffs, or 10K more than all energy-related layoffs, in just this one state so far in 2015, it means that the energy sector weakness has moved beyond just the oil patch and has spread to the broader economy and related industries in the one state that until recently had the best jobs track record since Lehman. 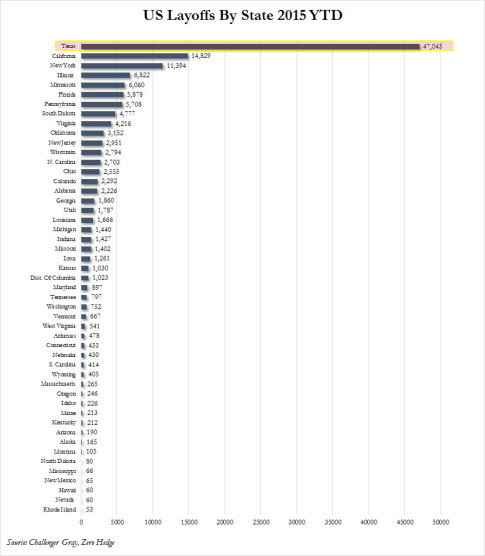 Putting this in perspective, once again, here are the job gains for Texas and everyone else: 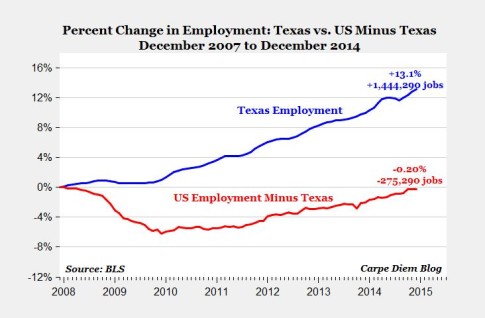 So, to loosely paraphrase Tim Geithner, “Dear Texas: Welcome to the Recession”