Iranian-backed Houthi rebels are now in control of the central Crater district in the key Yemeni port city of Aden despite a seventh consecutive day of bombing raids by the Saudi-led coalition which is keen on preventing the city from falling. Aden is the second largest city in the country with a population of some 800,000 and as noted by The Guardian, is “the last major holdout of fighters loyal to the Saudi-backed President Abd Rabbu Mansour Hadi.” Residents have reported the presence of tanks, sniper fire, and patrolling Houthi fighters as the militia moves closer to exerting complete control over the city.

Residents of Aden’s central Crater district said Houthi fighters and their allies were in control of the neighbourhood by midday on Thursday, deploying tanks and foot patrols through its otherwise empty streets after heavy fighting in the morning.

It was the first time fighting on the ground had reached so deeply into central Aden. Crater is home to the local branch of Yemen’s central bank and many commercial businesses.

“People are afraid and terrified by the bombardment,” one resident, Farouq Abdu, told Reuters by telephone from Crater. “No one is on the streets – it’s like a curfew“.

Another resident said Houthi snipers had deployed on the mountain overlooking Crater and were firing on the streets below. Several houses were on fire after being struck by rockets, and messages relayed on loudspeakers urged residents to move out to safer parts of the city, he said. 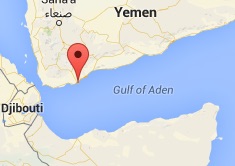 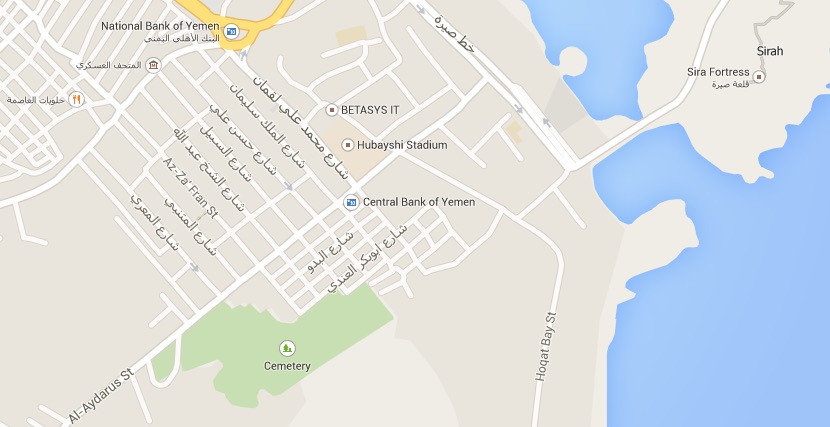 As you can see from the map above, the local branch of Yemen’s central bank is located in the area, which suggests the Houthis (and, as you’ll see below, Al Qaeda) may be playing for a repeat of what occurred just 9 months ago when jihadis seized $400 million from the Mosul central bank in Iraq making ISIS the best funded islamic fundamentalist force in the world. Of course the tragically ridiculous part of the whole story is that the Houthi advance is very likely being aided by some of the $500 million worth of weapons the US “misplaced” in the country so in short, US-armed, Iranian-backed rebels have now overthrown a US puppet government, fought their way into the last important city still loosely under coalition control, and are now operating a few blocks from a branch of the Yemeni central bank.

The Crater district is also home to more than 75,000 Yemenis meaning the risk of civilian casualties from aerial bombardment is cause for concern and could make it more difficult for the Saudi raids to be effective especially given some ambiguity about who was ultimately responsible for the death of some 40 civilians at a refugee camp earlier this week. Here’s the Washington Post with more:

The rebels, who control Yemen’s capital, Sanaa, hope to find new defensive positions and open fresh supply channels by taking full control of Aden. The Saudi-led alliance, meanwhile, is trying to hang on to the city but is wary about carrying out airstrikes in populated areas for fear of civilian casualties…

It follows accounts by aid groups of increasing civilian deaths in the air campaign against the Houthis. Saudi Arabia and its partners want to reinstate President Abed Rabbo Mansour Hadi, who fled Yemen last week in the face of a rebel advance on his compound in Aden.

The city appeared closer to falling into rebel hands after Wednesday’s gains. Houthi fighters — joined by soldiers loyal to former president Ali Abdullah Saleh — faced barrages from a warship while on a coastal road but managed to reach areas near the center of Aden with tanks and vehicles mounted with heavy machine guns. At least some of the rebel forces entered the vacated Russian Consulate, said Anis Mansour, editor of the Huna Aden news Web site…

In Riyadh, Saudi Arabia, Asseri said forces are “doing everything they can” to avoid civilian casualties. But he said the rebels have increasingly shifted into residential areas to hide from airstrikes.

“They are inside the villages and towns as part of their strategy,” the spokesman said.

Houthies and pro-president Saleh penetrate deep in #Aden and reach Kreater according to residents pic.twitter.com/qLRViH7ZQz

…and the Houthis have taken control of the Presidential palace:

Meanwhile, there were reports on Thursday morning that foreign troops had arrived in the city creating speculation that a Saudi ground incursion had begun. Interestingly the unidentified foreign troops turned out to be Chinese soldiers.

Dozens of unidentified foreign troops reported disembarking in the port of Aden turned out to be Chinese soldiers maintaining security as an unknown party opened fire on a vessel evacuating foreign citizens, a Yemeni official told Sputnik.

He added that Chinese soldiers have already left the port, though reportedly they did not manage to take with them all the people intended to evacuate, not all of the Chinese nationals.

The deeper the Houthis entrench themselves in densely populated areas, the greater the likelihood that ground troops will be necessary to expel them. The fighting in Aden comes as the conflict claimed its first Saudi soldier when border troops came under attack overnight:

Meanwhile, Saudi Arabia said one of its guards along the border with Yemen was killed Wednesday night. It was the first known Saudi casualty since the airstrikes started.

A border post in the Asir region came under heavy fire from a mountainous area inside Yemen, followed by cross-border skirmishes, according to the official Saudi Press Agency. Along with the Saudi guard who was killed, 10 other border guards were wounded, SPA said.

Finally, Al Qaeda militants led an assault on Mukalla where, after a firefight, the group freed some 300 militants being held in a local prison. Here’s more from WSJ:

Al Qaeda militants in Yemen stormed the coastal city of al Mukalla early Thursday, seized government buildings and freed at least 270 inmates from a prison, including many of its own operatives, Yemeni officials said.

The 2 a.m. attack on the eastern city, an important seaport, was a new setback for Saudi-backed government forces already fighting an uprising by Iranian-linked Houthi rebels. Al Qaeda’s incursion into al Mukalla was the latest sign that the extremist group is exploiting Yemen’s sectarian strife.

Until Thursday, al Makalla had been one of the few large Yemeni cities still controlled by government and tribal forces supportive of exiled President Abed Rabbo Mansour Hadi.

Abdullah al Sharafi, a Yemeni defense ministry official, said about one-third of those freed in Thursday’s prison break were AQAP militants. Among them, he said, was Khaled Batarfi, who was AQAP’s leader in the southern province of Abyan until his arrest in 2011 and served in the organization’s Shariah council, which provides religious direction.

Extremist groups such as AQAP and Afghanistan’s Taliban have typically used prison breaks to free their own foot soldiers and force more secular inmates, detained for petty crimes, to join their ranks.

“Al Qaeda needs to recruit and [there’s] no better way to recruit from prison,” Mr. Sharafi said. “A few of the escapees were senior al Qaeda leaders, but among those who escaped were dozens of al Qaeda fighters and loyalists.”

Between the first Saudi casualty, the unfolding humanitarian crisis, the logistical difficulties inherent in carrying out bombing raids on heavily populated areas, the rebel advance on military installations near the Bab el-Mandeb, and finally, with militants set to raid the country’s cash, it may become increasingly difficult for the Saudi-led coalition to support an assertion that air raids alone will be enough to debilitate the Houthis and bring the situation under control.