Just a week after Jean-Claude ‘I am not a hawkish warmonger’ Juncker pressed for the creation of a Unified European Army to combat the ‘looming’ threat of their massive trade partner Russia; RT reportsArab leaders have agreed to form a joint military force from roughly 40,000 elite troops and backed by warplanes, warships and light armor at a Sharm el-Sheikh summit. Egyptian President Abdel Sisi has announced a high-level panel will work out the structure and mechanism of the future force. The work is expected to take four months. 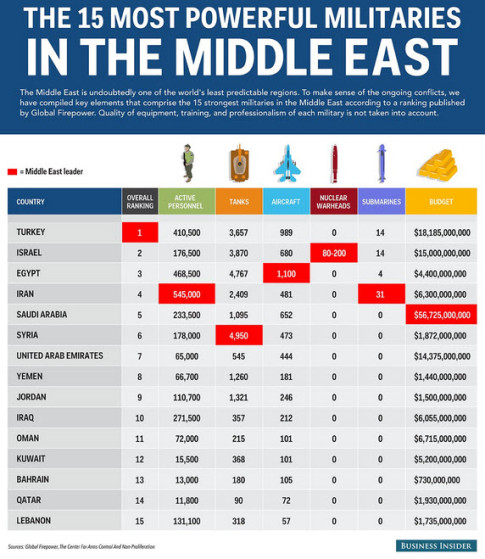 The president of the European Commission Jean-Claude Juncker, who leads the EU’s executive arm, said an EU army would let the continent “react credibly to threats to peace in a member state or a neighbour of the EU”.

And now, as RT reports, The Gulf is getting one too…

Arab leaders have agreed to form a joint military force at a Sharm el-Sheikh summit, hosting Egyptian President Abdel Sisi has announced. The meeting was dominated by the situation in Yemen, where Saudi Arabia leads a bombing campaign against rebels.

“The Arab leaders have decided to agree on the principle of a joint Arab military force,” Sisi said Sunday as the summit wrapped up. The summit final communique called for “coordination, efforts and steps to establish an unified Arab force” to intervene in countries such as Yemen.

The Egyptian leader said a high-level panel will work out the structure and mechanism of the future force. The work is expected to take four months.

Earlier reports said the joint Arab military may be formed from roughly 40,000 elite troops and backed by warplanes, warships and light armor. There are however doubts that all 22 members of the Arab League would significantly contribute to it; the formations of the force could take months.

In a communique signed in the Egyptian resort city, the Arab countries also called on the West to form a new more comprehensive response to militancy, which is a thinly veiled reference to the desire by some Arab nations to see a new Western military intervention in Libya.

The country that was devastated after civil war and a NATO bombing campaign, which helped to oust strongman Muammar Gaddafi in 2011, became a hotbed for Islamist radicals, including the terrorist organization Islamic State.

Not everyone is buying it as a possibility…

James Dorsey, a Middle East analyst with the Singapore-based S. Rajaratnam School of International Studies, said that despite support for a joint-Arab force, “it would still take months to create and then operate on an ad-hoc basis.

“I don’t think we will get an integrated command anytime soon, as no Arab leader would cede control of any part of their army anytime soon,” he said.

“Today we will have a formal declaration that would be negotiated every time during action.”

It appears The Endgame of this global game of Risk is fast approaching as one-by-one, geographically proximate nations join forces for whetever comes next.