On March 20th, a scientific working group consisting of seventeen experts from eleven countries released their evaluation of the herbicide glyphosate and four organophosphate insecticides for the World Health Organization’s International Agency for Research on Cancer (IARC). The group classified Monsanto’s glyphosate, the most widely used herbicide in the world, as “probably carcinogenic to humans.” 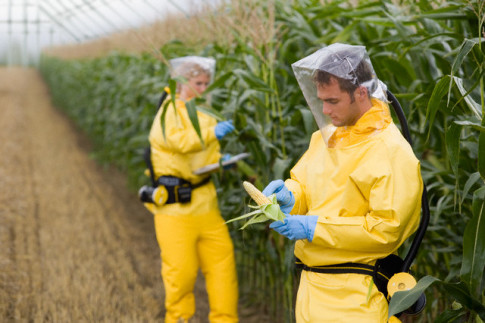 The finding gives new urgency to questions about the impacts of genetically engineered (GE) crops that are designed to tolerate herbicide applications. In the fifteen years following the introduction of Monsanto’s signature “RoundUp Ready” corn and soy crops in 1996, more than 500 million additional pounds of glyphosate and other herbicides have been used in the U.S.

“Given glyphosate’s widespread usage with crops genetically engineered to tolerate herbicides, IARC’s finding comes none too soon. The working group found ‘convincing evidence’ that glyphosate can cause cancer in laboratory animals. This, combined with more than a decade of studies documenting human exposure to the herbicide, gave IARC sufficient evidence to make the ‘probable human carcinogen’ classification.

It should be noted that in well over a decade’s use of glyphosate in GE crops, hundreds of millions of pounds of this chemical have been released into the environment. USGS surveys document widespread water contamination, and — as documented in a recent Consumer Reports study — residues of glyphosate also show up in our food. Even though glyphosate is so widely used, the U.S. does not currently conduct biomonitoring for glyphosate residues, and USDA conducts only minimal testing for food residues.

The dramatic growth in herbicide use in the U.S. driven by GE technology has resulted not only in increased human exposure to these chemicals, but also in the development of herbicide-resistant ‘superweeds.’ Farmers are offered more toxic mixes of herbicides as a so-called solution to this new problem. Dow’s recently approved Enlist seeds — designed for use with a mixture of glyphosate and the antiquated, highly toxic herbicide, 2,4-D — offer a case in point.