“Another amazing story, if true. Plans for a huge superhighway linking England with America motoring through Russia.
I think it is a great idea…….thought you might find it interesting, too. It would also provide many jobs!
Russia appears to be taking up the slack that the US has dropped……building and creating new things for a modern world.” 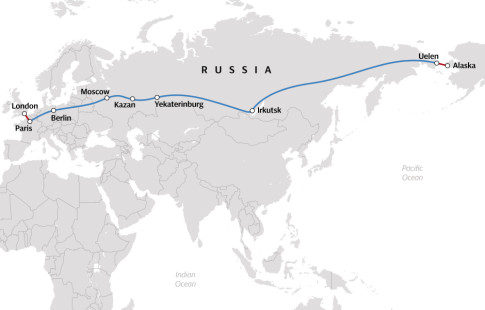 Plans for an ambitious 12,400-mile superhighway linking the Atlantic and the Pacific are reportedly being considered by Russian authorities.

The Trans-Eurasian Belt Development would see the construction of a vast motorway across Russia. It would connect with existing networks in Europe, making road trips to eastern Russia a far easier proposition. While roads do currently run across most of Russia, the quality tends to deteriorate the further you travel from Moscow.

The proposal, outlined in the Siberian Times, would see the road follow a similar route to the Trans-Siberian railway, through cities including Yekaterinburg, Irkutsk and Vladivostok. A new high-speed train line would also be constructed, along with pipelines for gas and oil. The rail network may also be extended to the Chukotka region of Russia and across the Bering Strait to Alaska – making overland trips from Britain to the US – via the Channel Tunnel – a possibility.

The idea, which developers hope will help boost tourism and make Russia a global transportation hub, was presented at a meeting of the Russian Academy of Science.

Vladimir Fortov, the Head of the Russian Academy of Science, said the project is “very ambitious and expensive”.

But he added: “It will solve many problems in the development of the vast region. It is connected with social programs, and new fields, new energy resources, and so on.

“The idea is that basing on the new technology of high-speed rail transport we can build a new railway near the Trans-Siberian Railway, with the opportunity to go to Chukotka and Bering Strait and then to the American continent.”

According to Anthony Lambert, Telegraph Travel’s rail expert: “The principal attraction of the journey is, of course, the Russian landscape – the vast panoramas and sense of immensity so vividly captured by such artists as Isaac Levitan and Ivan Shishkin. The taiga is mesmerising.

“Looking out at the panorama of larch, silver fir, pine and birch induces the kind of reverie that is one of the pleasures of train travel, a random stream of thoughts and images that drifts on like the forest. In clearings, villages that could have come from a Levitan or Shishkin painting break the spell and make one wonder what life must be like in such a remote land.”

1 thought on “Plans For Superhighway Linking Britain And America”