Following yesterday’s news that the ECB is now running simulations on what a Grexit would mean for Greek bond prices (spoiler alert:
“fundamentals” suggest a 95% loss), overnight we got more confirmation that Mario Draghi continues to tighten the screws on the Greek sovereign corpse, when Bloomberg reported that the ECB once again raised the maximum amount of emergency liquidity available to Greek lenders by €400 million, but less than the Greek central bank requested, people familiar with the decision said.

However, not a single penny from this additional emergency “liquidity” would enter the economy, as all of it was merely provided to offset the ever faster Greek bank run because as Reuters reported, on Wednesday Greek banks saw deposit outflows of €300 million, the highest in a single day since a February deal with the euro zone that staved off a banking collapse, two senior Greek bankers familiar with the matter said on Thursday.

“The uncertainty over the lack of progress in negotiations and the negative newsflow has affected sentiment,” one banker told Reuters. “It’s not a huge amount but the worry is whether this is the start of a trend that could get worse.”

“Under the current climate, with worries of a ‘Grexident’, savers are unlikely to return cash to the banking system soon,” said another banker. “Outflows may continue ahead of this weekend.”

Congratulations to those who were among the Greeks who successfully withdrew the €300 million: this is probably one of the last batches of capital permitted to be pulled from Greek banks. For now the ECB has granted Greece a few more days (hours) in which deposit withdrawals are permitted. However, all that will cease and Greece will be “blueprinted” the moment the ECB announces that there will be no more ELA boosts and it’s all over.

Meanwhile, the Greek government, instead of seriously contemplating a Plan B outside of the Eurozone, was busy thinking of new ways to raid its own population just to repay the “loathed” Troika.

In the latest sad indication of just how truly insolvent Greece is, Reuters also reported that days after raiding its own Pension funds to repay the IMF (which in turn lent the cash to Ukraine so it could repay Ukraine’s obligations to Gazprom and thus Putin), the Syriza government is now raiding the major state utility firms to lend the government cash through short-term repo transactions as it scrambles to avoid running out of cash.

Prime Minister Alexis Tsipras’s government has already resorted to dipping into the cash reserves of pension funds through such transactions, officials told Reuters earlier this month.

Kathimerini, citing unnamed sources, said the government was calling on the main utilities, such as the Athens Water Co (EYDAP) and the Public Power Company, to undertake repo transactions in which state entities lend money to the Greek debt agency through a short-term repurchase agreement.

Kathimerini also named the telecoms company OTE as on of those that Athens could look to for cash, though the Greek state only holds a 10 percent stake in OTE. The company is 40 percent-owned and managed by the German telecoms giant Deutsche Telekom. PPC, EYDAP and OTE had no immediate comment.

This is how the market assessed the latest batch of Greek developments: Greek bond yields just soared to the highest in two years! 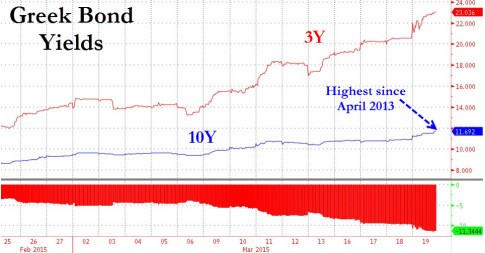 Needless to say, unless Greece is actively negotiating right now, not only how to implement the current bailout, but the terms of the third Greek bailout as well (which will likely demand a left kidney from every Greek citizen as collateral), it is all over.