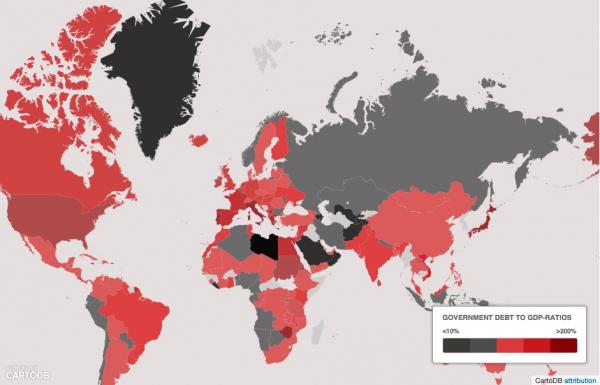 As we spelled out explicitly and succinctly late last month, there is one overriding and extremely simple reason why seemingly every central bank in the developed world is bound and determined to move heaven and earth in the pursuit of generating a “healthy” level of inflation. With 9 countries sitting on debt-to-GDP ratios of 300%+, it’s either inflate the debt away or be crushed under the sheer weight of it.

Below is a map showing just where all of the red ink is concentrated and as The Telegraph notes, “not one developed economy (and only five emerging markets) has managed to reduce debt-to-GDP ratios which include both household and government debt. When taken together, this total debt mountain has grown by $57 trillion since 2007, far outpacing global growth.”