“Reuters reported that Venezuela’s central bank is in talks with Wall Street banks to create a gold swap that would allow it to monetize some $1.5 billion of the metal held as international reserves, according to government sources familiar with the operation.”

If true, then you know now who really is in control in Venezuela. 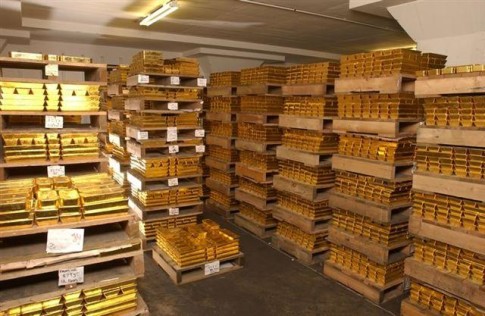 Yesterday we reported that in retaliation to the latest Obama executive order which declared Venezuela a national security threat and ordered sanctions against seven officials, Maduro promptly took advantage of this “outside threat” to rally his toilet paper-starved population “around the flag”, and while pointing at the “evil imperialist” Obama, granted himself even greater authoritarian powers: “I have put together a special law that gives me special powers to preserve the peace, the integrity and the sovereignty of the country before any situation that presents itself due to this imperialist aggression.“

Bloomberg further quoted Maduro as saying that the “special decree powers will help defend Venezuela democracy, freedoms”, that “the U.S. using human rights issues to justify invasion of Venezuela, planning trade blockade”, and that Maduro will “lead a special defensive military exercise on March 14.” Because nothing screams democracy like going “peak dictator” and launching a military exercise.

Venezuela’s always entertaining leader aside, Venezuela’s political problems have their basis in, and will only get worse due to one simple thing: money, or the lack thereof.

As a reminder, the nation whose primary – and only according to some – export is oil, has been slammed in recent months due to tumbling oil prices, which means oil is now a loss-maker for Caracas, whose oil breakeven price is said to be far higher than where Brent is currently trading. Which is why Maduro’s political troubles seem to be multiplying in recent months: in fact it has gotten so bad that some press reports suggest Maduro’s grip on the military is starting to wane.

Which likely explains why in an attempt to secure some stability, i.e., funds, now that Venezuela is no longer able to tap Chinese bailout loans as last-recourse funding, Reuters reported that Venezuela’s central bank is in talks with Wall Street banks to create a gold swap that would allow it to monetize some $1.5 billion of the metal held as international reserves, according to government sources familiar with the operation.

Under the swap, the central bank would provide 1.4 million troy ounces in exchange for cash, said a central bank source. After four years, it would have right of first refusal to buy the gold back, added the source, who asked not to be identified.

Of course, by then Maduro will almost certainly no longer be the ruler, so the “gold buying back part” will be someone else’s problem, and what is actually happening is that Maduro is “pawning” some 1.4 million ounces of gold to a banker syndicate, one organized by Bank of America and Credit Suisse according to Reuters, in exchange for $1.5 billion.

Or said otherwise, a liquidation.

The banks and Venezuela’s central bank did not immediately respond to requests for comment.

“Work is being done to complete this operation toward the end of April,” said another source, linked to Venezuela’s finance ministry.

Venezuela would have to pay interest on the funds but the central bank would most likely be able to maintain the gold as part of its foreign currency reserves.

As a further reminder, most of Venezuela’s reserves are held in gold after late socialist leader Hugo Chavez began moving central bank assets away from the dollar in the wake of the 2008 global financial crisis. “The central bank in late 2013 received proposals to carry out a similar operation, the bank’s chief said at the time, but denied any agreements had been completed.”

And now, Venezuela is selling its gold, which at least in the global central bank arena, appears to be a far more liquid asset that “tradition” and is instead perfectly legitimate legal tender.

Finally, now that Maduro has tipped his hand how he plans on funding the country’s near term debt and cash obligations, this is just the beginning: his administration faces a cash crunch following the maturity of a 1 billion euro bond this month and coupon payments of nearly $700 million in April. Expect Venezuela’s gold liquidation to accelerate. The only question is who will end up the rightful owner of Venezuela’s physical gold once the pawn shop confiscates the collateral.