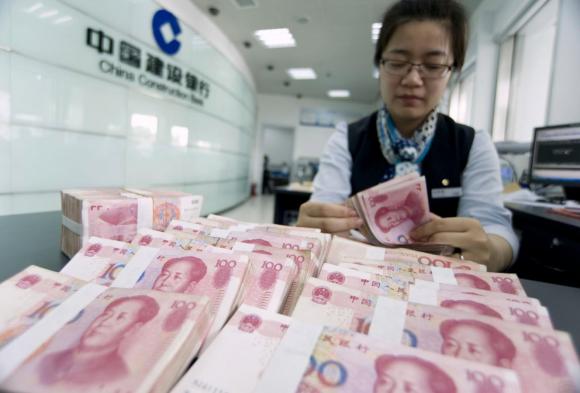 One of the recurring threats used by the western nations in their cold (and increasingly more hot) war with Russia, is that Putin’s regime may be locked out of all international monetary transactions when Moscow is disconnected from the EU-based global currency messaging and interchange service known as SWIFT (a move, incidentally, which SWIFT lamented as was revealed in October when we reported that it announces it “regrets the pressure” to disconnect Russia).

Of course, in the aftermath of revelations that back in 2013, none other than the NSA was exposed for secretly ‘monitoring’ the SWIFT payments flows, one could wonder if being kicked out of SWIFT is a curse or a blessing, however Russia did not need any further warnings and as we reported less than a month ago, Russia launched its own ‘SWIFT’-alternative, linking 91 credit institutions initially. This in turn suggested that de-dollarization is considerably further along than many had expected, which coupled with Russia’s record dumping of TSYs, demonstrated just how seriously Putin is taking the threat to be isolated from the western payment system. It was only logical that he would come up with his own.

There were two clear implications from this use of money as a means of waging covert war: i) unless someone else followed Russia out of SWIFT, its action, while notable and valiant, would be pointless – after all, if everyone else is still using SWIFT by default, then anything Russia implements for processing foreign payments is irrelevant and ii) if indeed the Russian example of exiting a western-mediated payment system was successful and copied, it would accelerate the demise of the Dollar’s status as reserve currency, which is thus by default since there are no alternatives. Provide alternatives, and the entire reserve system begins to crack.

Today, we got proof that it is the second outcome that is about to prevail following a Reuters report that China’s international payment system, known simply enough as China International Payment System (CIPS), which serves to process cross-border yuan transactions is ready, and may be launched as early as September or October.

According to Reuters, the launch of the will remove one of the biggest hurdles to internationalizing the yuan and should greatly increase global usage of the Chinese currency by cutting transaction costs and processing times.

It will also put the yuan on a more even footing with other major global currencies like the U.S. dollar, as CIPS is expected to use the same messaging format as other international payment systems, making transactions smoother.

CIPS, which would be a worldwide payments superhighway for the yuan, will replace a patchwork of existing networks that make processing renminbi payments a more cumbersome process.

In other words, while the west was using every provocation involving the Ukraine civil war as an opportunity to pressure Russia into developing its own cross-border payment system, it achieved not only just that but it also pushed China to accelerate the roll out of its own international payment system, in the process telegraphing to the world that the USD is replacable as a reserve currency and giving any other nations (such as the BRICs) the green light to think of SWIFT as an alternative to either the Russian or Chinese payment system (which with enough political and financial stimulus, they would be delighted to do).

But what is most disturbing is just how quickly the Chinese regime change is coming:

“If it’s all smooth, (the launch) will be in September or October. If there is a need for a bit more time, we are still confident about (rolling it out) before the year-end,” said the source, who declined to be named because he is not authorized to speak to the media.

The system was expected to be launched in 2014 but was delayed by technical problems, with most market participants anticipating it would not come on stream before 2016.

Needless to say, China will be delighted to have its own unified payment system, one that will further internationalize the Renminbi which at least check had become one of the top five payment currencies in November 2014, overtaking both the Canadian and the Australian dollar based on SWIFT data.

Until now, cross-border yuan clearing has to be done either through one of the offshore yuan clearing banks in the likes of Hong Kong, Singapore and London, or else with the help of a correspondent bank in mainland China.

“Misunderstandings under the current clearing system happen from time-to-time due to different languages and codings. The CIPS is a breakthrough since it will offer a united platform and enhance efficiency,” said Raymond Yeung, an analyst at ANZ in Hong Kong.

The launch of CIPS will enable companies outside China to clear yuan transactions with their Chinese counterparts directly, reducing the number of stages a payment has to go through.

It will also make it far more difficult for the NSA to track payments to and from the mainland when such compromised intermediaries as SWIFT are used.

This is how the Mercator Institute for China Studies previewed this major development:

The Chinese government is striving towards a controlled internationalization of China’s currency through a step-by-step expansion of the use of the RMB in Chinese foreign trade and investment. Towards this end, a worldwide network of agreements dealing with central bank currency swaps, the direct exchange of the RMB with other currencies, and RMB clearing hubs has been built. The establishment of an independent payment system (CIPS) for RMB transactions and an alternative to the existing SWIFT would further increase China’s autonomy vis-à-vis U.S. centred financial market structures. 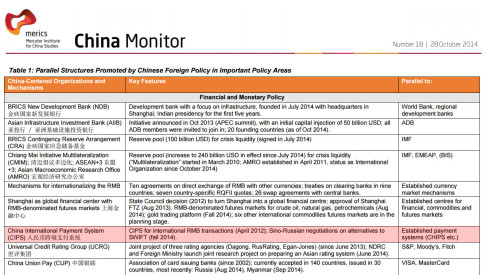 Finally, as it becomes easier to transact in non-USD terms, it will merely accelerate the adoption of the Chinese Yuan as the primary currency of global trade, or what little is left of it, as opposed to the currency of financial engineering.

Global yuan payments increased by 20.3 percent in value in December compared to a year earlier, while the growth for payments across all currencies was 14.9 percent for the same period, SWIFT said.

The final observation to make here is that if indeed it was the Obama administration’s brilliant ploy to kick out Russia – and by geopolitical affiliation, China – out of a monetary transaction mechanism that is controlled and supervised by the US and force the two biggest challengers to US global dominance into their own (or joint) payment system, then well, congratulations: it succeeded.

5 thoughts on “The De-Dollarization Axis: China Completes SWIFT Alternative, May Launch As Soon As September”