To some, gold is merely a tradition; to others, such as the first secretary of the North Korean embassy in the capital of Bangladesh, it is one of the easiest ways to smuggle $1.7 million. Or at least should have been on paper. Instead, what happened on Thursday night when Son Young-nam landed in Dhaka on a flight from Singapore, carrying a ridiculous amount of physical gold and hoping to get through customs without a glitch due his diplomatic status, things went downhill fast.

According to the BBC reports, Young-nam’s baggage was searched and almost 27 kilos, or 59 pounds, of gold bars and ornaments were recovered. 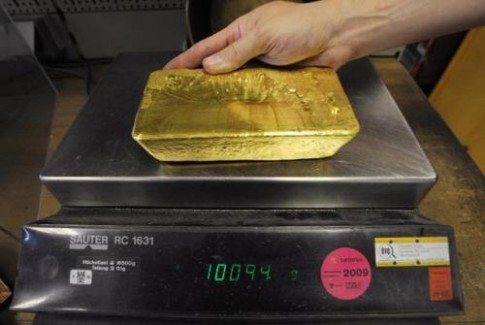 Initially the diplomat refused to allow customs officers and police to examine his luggage. “He insisted that his bags cannot be scanned because he’s carrying a red passport and he enjoys diplomatic immunity,” Moinul Khan, head of Bangladesh’s customs intelligence department told AFP.

Then “after more than four hours of drama, he gave in and we found gold bars and gold ornaments weighing 26.795kg (59lb), which is worth 130 million taka.” Or about $1.7 million dollars.

The customs head said the diplomat was told that more than 2kg of gold could not be brought into the country. Which means that now that the gold, nearly $2 million of it, now belongs to the great Bagladeshi void, after it was confiscated and the diplomat was released under the Vienna Convention.

Bangladeshi authorities have said they plan to prosecute Mr Son.

Khan added: “It’s a clear case of smuggling. We believe he would have sold the gold to a local criminal racket. He is being used as a carrier.”

And while the North Korean diplomat is the clear loser in this case, it is far more likely that the gold ultimately belonged to someone far closer to Kim Jong-un, if not the “fearless leader” himself. As WSJ adds:

Sales of gold have long been an important source of funds for the North Korean regime, which has been largely cut off from the global financial system by sanctions imposed to curb its nuclear-weapons program.

Kim Kwang-Jin, a former banker for the Pyongyang regime, said North Korea could have been moving the precious metal in an effort to find buyers.

A man who answered the phone at the North Korean Embassy in Singapore and declined to give his name said he had “no idea” about the gold shipment and hadn’t heard of Mr. Son.

The problem for North Korea is that its traditional gold-smuggling routes may be about to close up, leaving the nation unable to “liquify” its gold holdings:

North Korea has previously sold gold bullion in the Singapore market, he said. But tighter restrictions imposed by the city-state on sales of precious metals, stones and other valuable items last year have made it harder. Singapore’s new rules, intended to combat money laundering and terrorism financing, require dealers to submit a report to the government for any transaction worth over about $14,000.

Gold sales help provide funds used by North Korean leaders to ensure the loyalty of senior officials by providing them with a comfortable lifestyle, according to high-level defectors.  Choi Kun-Chol, a former senior North Korean official who worked at the state’s main gold-trading business, told the Journal last year that sales of gold from North Korean mines has fallen from a peak of around 10 tons in the late 1980s to around four tons in more recent years.

Unfortunately for Mr. Son, who has now made the fatal error of being caught, his fate is now assured and the diplomat will promptly be “disappeared” never to be heard from again. Because in North Korea, $1.7 million is a vast amount, in whatever denomination.

As for the winners, they are clearly the Bangladeshi customs agent: “official figures show customs officers have seized nearly 1,000kg of gold in the past 22 months, at Bangladesh’s two international airports.”

Incidentally, for every North Korean diplomat whose gold contraband is caught, 9 others manage to sneak through.

Gold smuggling through the Dhaka airport has risen sharply in recent months, with large quantities seized. In February, officials discovered 61 kilograms of gold in the toilet of a Bangladeshi aircraft.

In a sign of the times, whistleblowers who help bust illegal gold shipments can get a bigger reward in India than those who help catch cocaine and heroin smugglers.

“There has been a several-fold increase in gold smuggling this year after restrictions from the government, which has left narcotics behind.”

In June, a passenger flying from Dubai was caught at New Delhi airport with about 755 grams (1.7 lbs) of solid gold staples painted grey. Officials stopped the man because the cardboard boxes he was carrying were stapled far more than seemed necessary.

In an effort to change that, Mumbai customs offers a reward of up to 50,000 rupees per kg of bullion seized for informers in gold smuggling cases. Cocaine and heroin informers get only up to 40,000 rupees and 20,000 rupees respectively.

At least we now know where Varoufakis got his idea to pay tourists to become “wired” tax spies working for the insolvent Greek government.