We are witnessing a profound secular sea-change: the failure of expanding debt and leverage to lift the real economy of wages and household income.

When push comes to shove, you only need one chart to predict the future: debt and wages ( credit and compensation). This chart displays debt and wages as a ratio: debt/wages. What it reveals is the endgame of financialization: creating more debt no longer pushes wages higher. 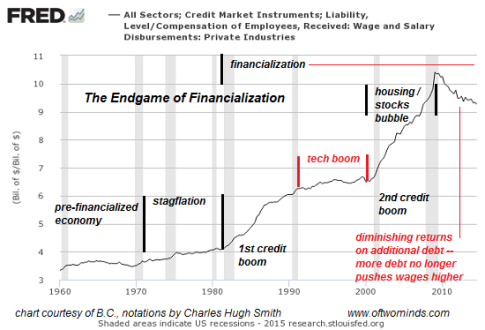 I have broken the past five decades into easily recognizable economic periods. During the organic growth of the 1960s that many view as the ideal–what I term the pre-financialized economy, the line is almost flat, as debt and wages expanded in a balanced fashion.
The 1970s, a rocky period of stagflation, higher energy costs and painful adjustments to the economy, is remarkably stable when boiled down to the debt/wage ratio.
Financialization–the securitization of previously stable assets, the expansion of leverage and speculative financial instruments–began in the early 1980s. We see the effect of rapidly expanding debt on the economy: the line leaps higher and only flattens out in the tech-boom 1990s.
Why did the ratio flatten out? This was a period of organic expansion similar to the 1960s: wages expanded as did the number of jobs. Debt and wages once again expanded in a balanced fashion.
After the tech bubble burst, the Federal Reserve lowered interest rates and pushed financialization to the max. The debt/wage ratio line soared on the rocket fuel of debt, leverage and speculation.
But something changed around 2009. Expanding debt and leverage no longer boosted wages. For the first time in 30 years, juicing debt and leverage did not push wages higher–rather, wages declined or stagnated, despite trillions of dollars of Fed stimulus, near-zero interest rates and all the other tricks of financialization.
The returns on additional debt and leverage have diminished to near-zero. This is the endgame of financialization: expanding debt and leverage no longer move the needle on wages and household income. Rather, adding more debt is weighing on wages.
After 30 years of success, the endgame is finally here. We are witnessing a profound secular sea-change: the failure of expanding debt and leverage to lift the real economy of wages and household income.