– The Chinese have put out billboard ads announcing the renminbi as the new world currency (Sovereign Man, March 4, 2015):

When I arrived to Bangkok the other day, coming down the motorway from the airport I saw a huge billboard – and it floored me.

The billboard was from the Bank of China. It said: “RMB: New Choice; The World Currency” 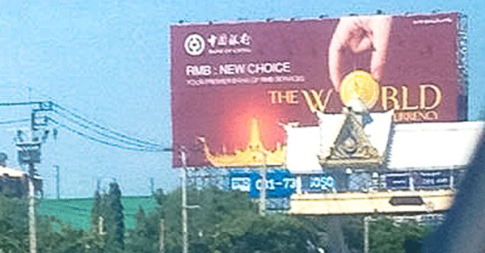 Given that the Bank of China is more than 70% owned by the government of the People’s Republic of China, I find this very significant.

It means that China is literally advertising its currency overseas, and it’s making sure that everyone landing at one of the world’s busiest airports sees it. They know that the future belongs to them and they’re flaunting it.

And it’s true. The renminbi’s importance in global trade and as a reserve currency is increasing exponentially, with renminbi trading hubs popping up all over the world, from Singapore to London to Luxembourg to Frankfurt to Toronto.

Multinational companies such as McDonald’s are now issuing bonds in renminbi, and even sovereign governments are issuing debt denominated in renminbi, including the UK.

Almost every major global player out there, be it governments or major multinationals, is positioning itself for the renminbi to become the dominant reserve currency.

But here’s the thing. Nothing goes up and down in a straight line. And China is in deep trouble right now. The economy is slowing down and the enormous debt bubble is starting to burst.

A lot of people, including the richest man in Asia, are starting to move their money out of the country.

So while the long-term trend is pretty clear – China becoming the dominant economic and financial superpower – the short-term is going to look incredibly rocky.

We talk about this in today’s short podcast with Sovereign Man’s Chief Investment Strategist, Tim Staermose, which includes a few ways to actually make money from China’s short-term unwinding.