Just hours after India’s ‘surprise’ rate cut (which saw the SENSEX surge and then dump to close red), Poland has surprised the market with a bigger-than-expected rate cut. Despite two-thirds of econmomists expecting a mere 25bps cut, the Polish Central Bank slashed its benchmarket 7-day rate to just 1.5% – the lowest on record. Today’s cut “makes up for inaction in previous months” after Poland held rate flat in January and February (but echoes Poland’s Oct ‘surprise’ greater-than-expected ease of 50bps. Polish stocks dropped on the news (but recovered), banks are weaker, and the Zloty is selling off on this news (pushing back towards record lows)…

Poland’s economy expanded 3.1 percent from a year earlier in the fourth quarter. While that’s the slowest pace in 2014, it also capped the fastest full-year expansion in three years as deflation helped increase disposable incomes and consumer confidence.

After predicting inflation of 1.2 percent in 2015, it now believes consumer prices “will probably fall on average this year,” the ministry’s Chief Economist Ludwik Kotecki said on Feb. 25.

The 10-member Monetary Policy Council didn’t use the word “deflation” in its official statements until January, as Governor Marek Belka and other rate-setters predicted the decline in consumer prices wouldn’t be sustained or persist into 2015. In January, however, deflation deepened to 1.3 percent, more than analysts’ estimate and the 1 percent decline in December.

Policy makers were thus confronted with a conundrum, Belka told reporters on Feb. 4. While falling prices help boost consumption, “persistent deflation may be detrimental,” causing a textbook reaction to deflation. The governor stressed that Poland had “never experienced” deflation in its 25 years as a free-market economy and the potential negative consequences can’t be ruled out.

Belka lost two rate-cut motions in November by 4-6 margins after Elzbieta Chojna-Duch, who’d never failed to back monetary easing at a previous meetings which resulted in decisions, unexpectedly sided with the Council’s hawks. At subsequent news conferences, Belka reiterated that he saw room for more rate cuts. He needs at least a 5-5 deadlock to exercise his tie-breaking vote.

“The main consideration is persistent deflation, and the governor’s view will be crucial,” Chojna-Duch, the probable swing voter, said in an interview on Feb. 23.

And so today’s surprise cut is, as one analyst put it, is “making up for previous inaction,”

The Monetary Policy Council lowered its benchmark seven-day reference rate by 50 basis points to 1.5 percent, matching the prediction of 11 of 36 economists in a Bloomberg survey. Twenty-three analysts forecast a 25 basis-point reduction, while two predicted no change.

Rate setters have hesitated to join their global peers in monetary easing since they last cut borrowing costs by 50 basis points in October, in part because falling prices didn’t stall Poland’s economy. Opposition to rate cuts may have been overcome by the central bank’s latest staff projections, which will show price growth staying subdued much longer than previously forecast, according to Michal Dybula, chief economist at BNP Paribas SA in Warsaw.

“There’s no point in dragging out rate cuts as the economic outlook improves,” Dybula said by phone on Tuesday, before the decision. “Cutting more deeply makes up for the inaction of previous months.”

The central bank predicted inflation would average 1.1 percent on an annual basis this year in previous staff projections published in November. Most commercial banks have since revised their estimates and now see price growth below zero through at least the first half of 2015.

The reaction is weaker currency (though rallying back modestly)… 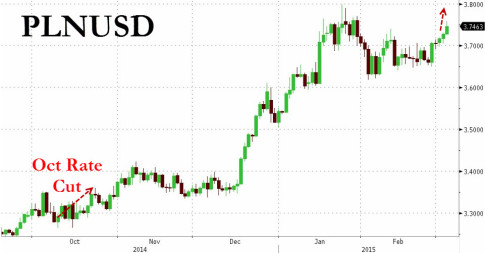 and the initial stock weakness has turned green 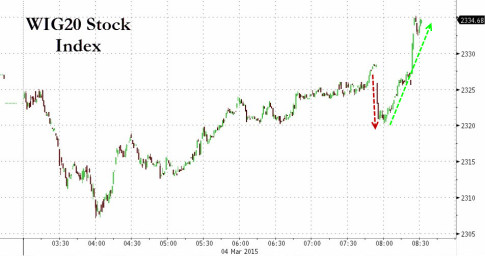 Romania’s central bank cuts its key interest rate by a total of 50 basis points, taking it to a new record low of 2.25 percent. Most analysts polled by Reuters had expected the latest cut.

The Swiss National Bank stuns markets by scrapping the franc’s three-year-old exchange rate cap to the euro, leading to an unprecedented surge in the currency. This de facto tightening, however, is in part offset by a cut in the interest rate on certain sight deposit account balances by 0.5 percentage points to -0.75 percent.

Peru’s central bank surprises the market with a cut in its benchmark interest rate to 3.25 percent from 3.5 percent after the country posts its worst monthly economic expansion since 2009.

Turkey’s central bank lowers its main interest rate, but draws heavy criticism from government ministers who say the 50 basis point cut, five months before a parliamentary election, is not enough to support growth.

The Bank of Canada shocks markets by cutting interest rates to 0.75 percent from 1 percent, where it had been since September 2010, ending the longest period of unchanged rates in Canada since 1950.

The ECB launches a government bond-buying programme which will pump over a trillion euros into a sagging economy starting in March and running through to September next year, and perhaps beyond.

The Monetary Authority of Singapore unexpectedly eases policy, saying in an unscheduled policy statement that it will reduce the slope of its policy band for the Singapore dollar because the inflation outlook has “shifted significantly” since its last review in October 2014.

12. Jan. 30 RUSSIA
Russia’s central bank unexpectedly cuts its one-week minimum auction repo rate by two percentage points to 15 percent, a little over a month after raising it by 6.5 points to 17 percent, as fears of recession mount following the fall in global oil prices and Western sanctions over the Ukraine crisis.

13. Feb. 3 AUSTRALIA
The Reserve Bank of Australia cuts its cash rate to an all-time low of 2.25 percent, seeking to spur a sluggish economy while keeping downward pressure on the local dollar.

14. Feb. 4/28 CHINA
China’s central bank makes a system-wide cut to bank reserve requirements — its first in more than two years — to unleash a flood of liquidity to fight off economic slowdown and looming deflation. On Feb. 28, the People’s Bank of China cut its interest rate by 25 bps, when it lowered its one-year lending rate to 5.35% from 5.6% and its one-year deposit rate to 2.5% from 2.75%. It also said it would raise the maximum interest rate on bank deposits to 130% of the benchmark rate from 120%.

15. Jan. 19/22/29/Feb. 5 DENMARK
The Danish central bank cuts interest rates a remarkable four times in less than three weeks, and intervenes regularly in the currency market to keep the crown within the narrow range of its peg to the euro.

16. Feb. 13 SWEDEN
Sweden’s central bank cut its key repo rate to -0.1 percent from zero where it had been since October, and said it would buy 10 billion Swedish crowns worth of bonds

18. February 18, BOTSWANA
The Bank of Botswana reduced its benchmark interest rate for the first time in more than a year to help support the economy as inflation pressures ease.
The rate was cut by 1 percentage point to 6.5 percent, the first adjustment since Oct. 2013, the central bank said in an e-mailed statement on Wednesday.

The Bank of Israel reduced its interest rate by 0.15 percentage points, to 0.10 percent in order to stimulate a return of the inflation rate to within the price stability target of 1–3 percent a year over the next twelve months, and to support growth while maintaining financial stability.

The Reserve Bank of India surprises markets with a 25 basis point cut in rates to 7.75 percent and signals it could lower them further, amid signs of cooling inflation and growth struggling to recover from its weakest levels since the 1980s. Then on March 3, it followed through on its promise and indeed cut rates one more time, this time to 7.50%

The Monetary Policy Council lowered its benchmark seven-day reference rate by 50 basis points to 1.5 percent, matching the prediction of 11 of 36 economists in a Bloomberg survey. Twenty-three analysts forecast a 25 basis-point reduction, while two predicted no change.