No need to show this Warren Buffett …

– Infographic: Someone please show this to Warren Buffett (Gold vs. the Financial System) (Sovereign Man, Feb 26, 2015):

Warren Buffett once famously chided that all the gold in the world would form a cube of 67 feet (20 meters) on each side.

In doing so, he was attempting to argue that there was no point in owning gold since all the gold in the world would be an unproductive, useless hunk of metal.

What’s ironic (and completely lost on the venerable Mr. Buffett) is that you could make the same argument about the paper-based financial system.

It’s estimated that the derivatives market now exceeds $1 QUADRILLION (15 zeros) in notional value. If you were to somehow accumulate and stack up $1 quadrillion, the pile would be thousands of feet high and hundreds of yards long… much bigger than the cube of gold.

My friends at Silver Bullion (a state-of-the-art precious metals depository here in Singapore) recently put together a great infographic which visualizes all of this—over $1 quadrillion in the paper financial system stacked against the known supply of gold and silver in the world. 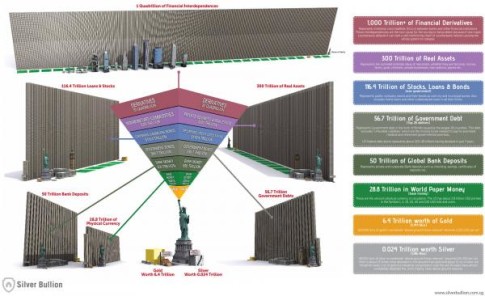 Now, it may be a cute thought experiment to blast gold as a useless hunk of metal. But the reality is that gold will never require a taxpayer-funded bailout. It won’t crash the financial system. And it won’t enslave future generations to higher taxes and inflation.

On the balance, at least as a means of preserving assets over the long-run, ‘useless’ certainly beats ‘destructive’.

(Actually gold can be put to productive use and generate a rate of return—it’s just that such platforms are extremely rare. I’ll share some exciting developments on this front with you soon.)