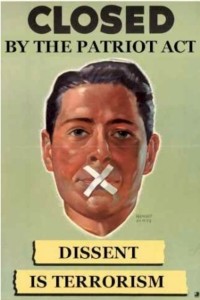 What you are about to read from CNN is just the very beginning of the intentional demonization of a growing segment of the U.S. population that rightly believes the government is run by a collective of thieving, corrupt, immoral sociopaths. This isn’t speculation either, years of content on this site serves as definitive proof that this is true. Commingling dissent, violence and “right wing” ideology will be key in the ultimate division of government critics in these United States, and a successful attempt to scare people away from questioning a clearly degraded and parasitic status quo.

The writing has been on the wall for many years, and I’ve warned about this development on many occasions (links at the end). If Martin Armstrong’s model is correct, and the U.S. economy starts to move downward in fall 2015, dissent will spread across the land like brushfire and the status quo will call dissenters terrorists (they already did this during Occupy Wall Street). My advice to everyone listening is don’t fall for it, and instead unite together in order to achieve a peaceful societal and economic paradigm shift.

Sure, there will always be Neo Nazis and genuine racist crazies out there who hate the government merely because they are small-minded and filled with hate, but they are a small number compared to those who have genuine grievances against the system which are not being redressed. Stories like the following are pure government propaganda and are guaranteed to increase exponentially in the years ahead.

Notice how CNN commingles violence with “rejecting government authority.” This is intentional, and meant to subliminally link the two ideas in the minds of the feeble minded who still get their news from CNN. In reality, there is no such connection. Conversely, this country was founded on the idea that a people should only submit to government when it working in their best interests. The first paragraph of the American Declaration of Independence is explicit:

Incredibly, this sentiment is now being associated with terrorism. Back to CNN.

A new intelligence assessment, circulated by the Department of Homeland Security this month and reviewed by CNN, focuses on the domestic terror threat from right-wing sovereign citizen extremists and comes as the Obama administration holds a White House conference to focus efforts to fight violent extremism.

Some federal and local law enforcement groups view the domestic terror threat from sovereign citizen groups as equal to — and in some cases greater than — the threat from foreign Islamic terror groups, such as ISIS, that garner more public attention.​

The Homeland Security report, produced in coordination with the FBI, counts 24 violent sovereign citizen-related attacks across the U.S. since 2010.

The government says these are extremists who believe that they can ignore laws and that their individual rights are under attack in routine daily instances such as a traffic stop or being required to obey a court order.

While groups like ISIS and al Qaeda garner the most attention, for many local cops, the danger is closer to home.

Importantly, the report emanates from the Department of Homeland Security (DHS), a bloated, ineffective, pointless and dangerous agency. Vox recent wrote an excellent article on the topic. Here are a few excerpts:

This hasn’t stopped DHS from trying to develop its own security capacity. It just means that whatever DHS does is already being done elsewhere in the government. And that duplication and fragmentation has made the national-security apparatus even harder to manage.

Take the example of equipment grants to state and local law enforcement. There were already two different federal programs to help police departments get equipment: the Department of Defense’s 1033 program, which sends out surplus military gear to law enforcement (and requires they use it within a year), and the Department of Justice’s Byrne grant program. But DHS now has its own set of grants to allow police departments to purchase military and other equipment. It’s supposed to be used for counterterrorism, but (just as with the other grant programs) police often end up using the equipment for routine drug enforcement.

Or think of “fusion centers,” regional hubs supported by DHS to share information among multiple federal agencies and between state, local and federal law enforcement. The fusion centers aren’t limited to sharing information about terrorism (they’re also supposed to monitor other types of crime), but it’s definitely a big component of their mission. The problem is that the FBI already has Joint Terrorism Task Forces to investigate terrorism, and Field Intelligence Groups to share information about it. In a 2013 study, the Government Accountability Office looked at eight cities, and found that the fusion centers in all eight cities overlapped at least partially with the FBI’s counterterrorism work — and in four of them, there was nothing the fusion centers did that the FBI wasn’t already doing. (There are also other things within DHS that overlap with fusion centers’ other purposes.)

The DHS is an agency looking for a problem. Which is why it had nothing better to do last year than raid the makers of women’s world series underwear. Recall: “War on Terror” Targets Underwear – Department of Homeland Security Raids Maker of Unlicensed World Series Panties.

We simply don’t need it, and the longer it exists, the greater a threat to liberty it will become.

The New Orwellian Term for Americans that Disagree with Government: “Paper Terrorists”