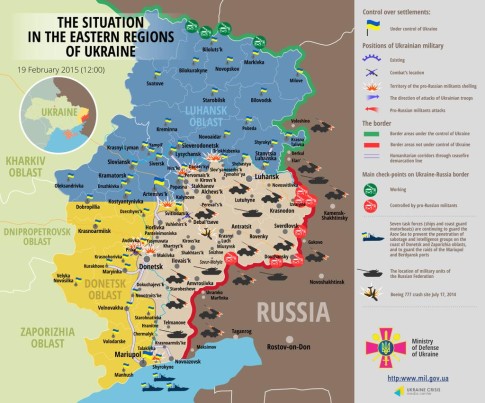 Yesterday, when we reported that the last Ukraine outpost in the rebel-controlled eastern territory, the town of Debaltseve, has fallen into separatist hands, we concluded that “perhaps the only question is whether fighting continues around Mariupol which would enable Russia to have a land corridor all the way to Crimea.”

Moments ago we got the answer when Reuters reported that “pro-Russian separatists have launched mortar attacks on government-held positions near the coastal town of Mariupol in southeast Ukraine and are building up their forces there, local military reached by telephone said on Thursday.”

“Right now there are mortar attacks on Shyrokine,” a local military spokesman said referring to a village about 30 km (19 miles) east of Mariupol, along the coast of the Sea of Azov.

“There is no attempt to seize our positions up to now. The rebels are bringing up reserves,” the spokesman said.

Well, since the Minsk ceasefire is officially over before it even started, one can be sure that an attempt will be made. The reason: as the updated map below showing who controls what territory in east Ukraine currently – with Debaltseve firmly in separatist hands – Mariupol is the last remaining outpost before “Novorossiya” will have a land access to Crimea.

As for what happens after Mariupol, too, falls? Well, the broke Ukraine government is just making it too easy. As Reuters also reports, “Ukraine has suspended supplies of gas to its eastern regions because the gas network was damaged by fighting between pro-Russian separatists and government forces, Ukrainian state gas firm Naftogaz said on Thursday. “Due to the extensive damage of the gas transport networks, the supply of gas … was suspended on Feb. 18. The resumption of gas supplies is not yet possible because of the ongoing hostilities in the region,” the company said in a statement.”

In other words, with Kiev fully cutting off east Ukraine from its control, it will be up to Putin to swoop in and “save” the territory from its host government which no longer cares about the fate of the people living there.